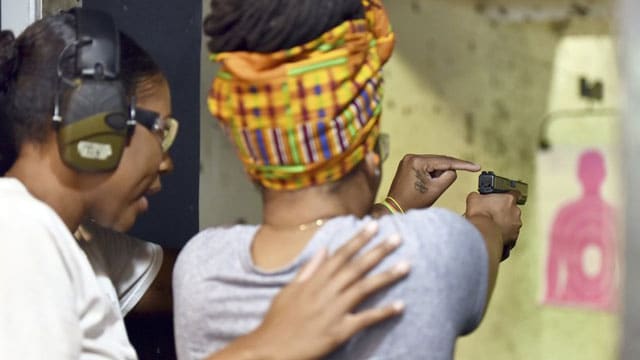 As the number of female and minority gun owners continues to grow, one Georgia-based firearm instructor aims to teach black women how to shoot.

Marchell Tigner, owner of Trigger Happy Firearm Instruction, is a domestic abuse and sexual assault survivor whose personal mission is to provide training to 1 million women.

According to her website, Tigner, whose love of firearms stemmed from spending seven years in the National Guard and later working at a firing range, started her company last year after she noticed a lack of representation for black women in the gun community. Tigner said she worked at a firing range and would often see women trying to learn how to use a firearm at the instruction of their significant others, something which, she said, made her uncomfortable.

“Sometimes it’s hard to believe you can do something until you see someone who looks like you in that position,” Tigner noted.

As part of the training, Tigner provides plastic replicas to women as she goes over basic safety rules and proper stance, grip, and handling. The instruction then moves to the range where women learn to load a magazine and, finally, shoot the target.

“The bad guy’s dead. He’s not getting back up,” Tigner tells a student as they look over a bullet-riddled target during a recent class in Lawrenceville, Georgia.

The class was made up of about 20 women; some experienced with firearms, some not.

Jonava Johnson, 50, who attended the class, noted that gun ownership has also been rather frowned upon in the black community. Johnson admitted her own fear of guns, which stemmed from a domestic violence situation when she was just 17 years old. Johnson’s ex-boyfriend, armed with a gun, threatened her before he fatally shot Johnson’s new boyfriend in front of her.

About 30 years after she witnessed the death of her high school boyfriend, Johnson considered getting a gun after her daughter was sexually assaulted in their own home. Johnson instead decided to get a guard dog, but she’s now a proud gun owner.

“I hope I never have to kill anybody, but if it comes down to me or my children, they’re out,” Johnson said.

Tigner said it’s important for women to feel like they’re in control of their own safety.

“I’m just here to empower women and make sure that no one else becomes a victim,” she said.