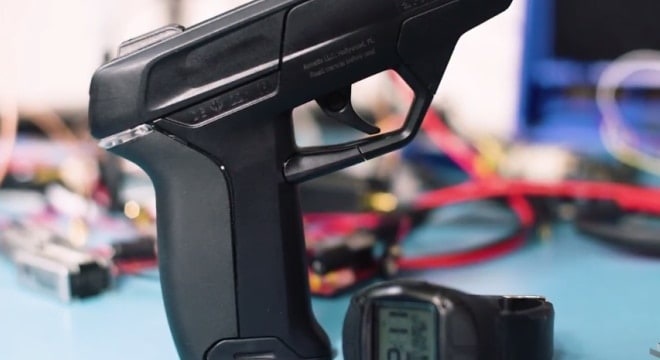 A security researcher found a number of both high and low tech hacks to find vulnerabilities in the Armatix iP1, including defeating it with a $10 magnet (Photo: Wired)

In the wake of a recent article highlighting several recently exposed security shortcomings in the German Armatix iP1 pistol, the trade organization for the firearms industry weighed in.

Guns.com sent the footage of Wired’s interview with a security researcher who found multiple ways to defeat the Armatix GmbH Smart System — a personalized handgun which is designed to pair to an RFID-equipped wrist watch to be able to fire — to Larry Keane, the National Shooting Sports Foundation’s senior vice president and general counsel.

Keane said he had heard rumors the gun could be defeated fairly easily but was surprised that it could be done with a simple magnet as detailed in the video.

“It does not change our view on authorized user recognition technology being applied to a firearm,” said Keane, standing by the group’s position that they are not opposed to the further development of so-called smart guns– as long as it is not made a requirement by lawmakers.

“No mandates, let the market work, you shouldn’t bring to market a product before it is truly safe and reliable,” he said.

Laws requiring the use of smart guns only — such as a dormant example adopted in New Jersey in 2002 — have been repeatedly blamed for the stagnation in the marketing of personalized firearms. Earlier this year Arizona’s Republican Gov. Doug Ducey approved a measure that would specifically block state or local laws requiring guns to use electronic firearms tracking.

Keane further warns any firearm that uses such advanced technology may be cost prohibitive to some potential gun owners. For instance, the controversial iP1 retails for $1,400 whereas many semi-automatic .22LR pistols can be had for less than a quarter of that amount from legacy gun makers with more name recognition.

“If consumers want it – a debatable proposition based on our polling – then manufacturers will decide whether to invest the R&D in developing it, but it will be very expensive and out of the price range for the vast majority of consumers,” Keane said.

When it comes to firearms safety, the industry insider contends that, at the end of the day, every firearm ever made is capable of being secured against unauthorized use beginning with a simple cable lock like the ones included with new firearms and that NSSF distributes as part of their Project ChildSafe gun safety education campaign.