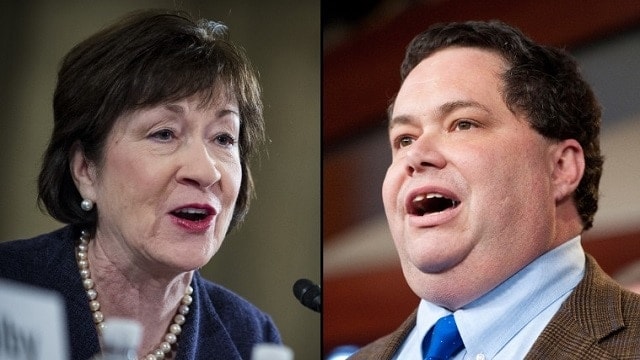 Republican Sen. Susan Collins of Maine took some heat Tuesday when a hot mic captured her tearing into President Trump and basting a fellow lawmaker for challenging her to a duel.

Collins’ comments came at the end of Tuesday’s hearing on the Senate Appropriations Subcommittee on Transportation, Housing and Urban Development, the Associated Press reported. She could initially be heard criticizing Trump’s proposed 2018 budget, which calls for deep spending cuts to domestic programs, Medicaid, medical research, food stamps and highway funding.

“Whenever there was a grant, they just X-ed it out, with no metric, no thinking about it, no nothing,” she said to Democratic Sen. Jack Reed of Rhode Island. “It’s just incredibly irresponsible.”

Collins also took the opportunity to mock fellow Republican Rep. Blake Farenthold, who on Friday called out “some female senators from the Northeast” for not supporting Trump’s health care legislation. He then said he would challenge them to a duel “Aaron Burr-style” if they were men from his home state of Texas.

“Did you see the one who challenged me to a duel?” Collins asked.

“I know,” Reed replied. “Trust me. Do you know why he challenged you to a duel? ’Cause you could beat the shit out of him.”

“I don’t mean to be unkind but he’s so unattractive it’s unbelievable,” Collins added.

Collins then referred to a picture of Farenthold grinning in pajamas next to a woman in lingerie.

Later on Tuesday, Collins said she had received an apology from Farenthold and had offered one in return.

“Neither weapons nor inappropriate words are the right way to resolve legislative disputes,” Collins said in a statement. “I received a handwritten apology from Rep. Farenthold late this morning. I accept his apology, and I offer him mine.”

For his part in the kerfuffle, Reed said he was just trying to lend support to Collins.