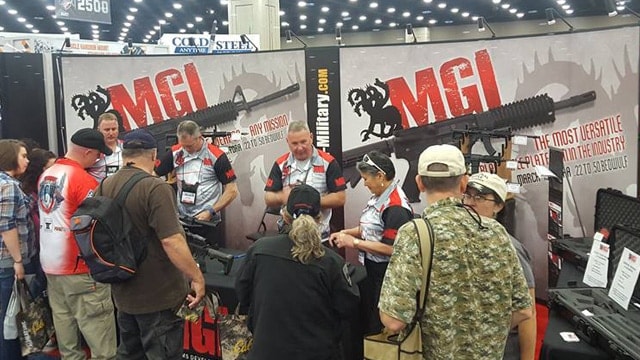 The MG Industries booth at the NRA annual meeting in 2016. (Photo: MGI/Facebook)

Bangor gun maker MG Industries filed for Chapter 7 bankruptcy to sell off assets to resolve debts, according to documents filed in a Maine federal court this month.

The company, known for the Hydra series of easily modifiable AR-style firearms, was started by Mack Gwinn, who before starting MGI founded Bushmaster Firearms.

According to the petition, MGI has between one and 49 creditors, zero and $50,000 in assets, and zero to $50,000 in liabilities. However, public records do not identify the creditors nor the amounts owed.

MGI’s bankruptcy follows eight years of growth in the gun industry and rising gun sales. Since 2009, sales increased 75 percent, federal data shows. Yet, there are few indicators that give insight into the private company’s financial health.

The company has also not released a public statement on the matter and public ATF manufacturing data shows little about its progress. ATF reports show MGI producing 315 rifles in 2015, 30 in 2012 and the company is not listed for other years dating back to 2010. A review of its website lists complete rifles and rifle parts available for sale.

In a 2010 interview with MaineBiz, a gun maker spokesman predicted rapid growth — 40 to 50 percent — each year for four or five years. But before that growth had been purposefully slow, with a strategy focusing more on developing a strong product than marketing.

Gwinn, MGI’s owner, founded the company in 2005, according to a public records search. As a former special forces soldier, he put his expertise into his work. His company’s staple product, the Hydra, was based on the M16 and developed to use interchangeable parts like a quick change barrel to change the weapon’s calibration.

In the 1970s, he founded Gwinn Firearms, which later became Bushmaster. The company was later sold to Remington Outdoor Company and became one of the largest gun makers in the country.