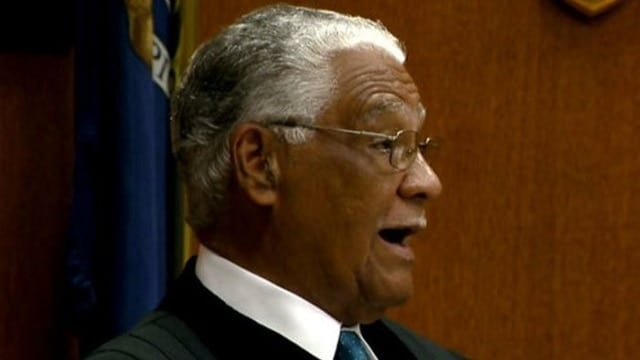 A Detroit judge scolded a mother during a Tuesday morning sentencing hearing, admonishing her for keeping a gun unsecured around children in her home.

Click On Detroit reported Shecolby Green was being sentenced for second-degree child abuse and a felony firearms charge, related to a March 25 incident in which her 9-year-old son shot himself with a handgun he had found in his mother’s purse.

The boy suffered a hand wound, was treated at a local hospital and was expected to recover.

Judge Dalton Roberson, a retired Wayne County Circuit judge who was filling in Tuesday for Judge Cynthia Gray Hathaway, sentenced Green to three years probation and also took the opportunity to lecture the mother, telling her she should not keep guns in her home with children around.

Roberson also took it a step further, saying he believed if there were fewer guns, there would also be fewer problems in the country.

The judge’s lecture went as follows:

Mrs. Green, you are a living example of why people should not have guns in their house. And I’m not saying that just to you. I say it to myself, too. I was an assistant prosecutor, and assistant United States attorney, defense lawyer and a judge for 30-some years, and I never owned a gun. And the reason I never owned a gun was because when I was a prosecutor, early in my legal career, I was trying a homicide case and there was a murder in the first degree, and the man who had been killed when these young people walked in his store to try to rob him, he tried to go for his gun and they killed. And the detective, I said to him, ‘I should get me a gun.’ And he said to me, ‘Dalton, you don’t need a gun in your house because if someone comes into your house, or contacts you on the street, if you go for the gun you end up getting killed.’ There’s nothing that you own that’s worth you giving up your life for, and you almost gave up your child’s life for it. Don’t go out and buy another gun, OK? Don’t let these people convince you that (you need a gun). There are societies in our country that have no guns, and believe me if we had less guns we wouldn’t have all the problems we have … with children in your house, you thought (the gun) was safe in your purse, didn’t you? It wasn’t.

Roberson continued by using an example from his own life to prove his point, telling Green of a time when his son was four years old and he and his wife found the boy covered in Vasoline in their bedroom.

“If there would have been a gun under the pillow, he’d have had it,” the judge concluded.

Detroit Police Chief James Craig, who supports responsible gun ownership and has called on gun owners to defend their homes, spoke on the case back in March and said the incident was no accident and could have been avoided if the mother had practiced safe gun storage.

“The child was going into the parent’s purse, possibly looking for candy, came across the weapon,” Craig said. “I do support law-abiding citizens, Detroiters, to have (concealed pistol licenses), but I’ve also indicated, in a very strong way, the importance of training.”