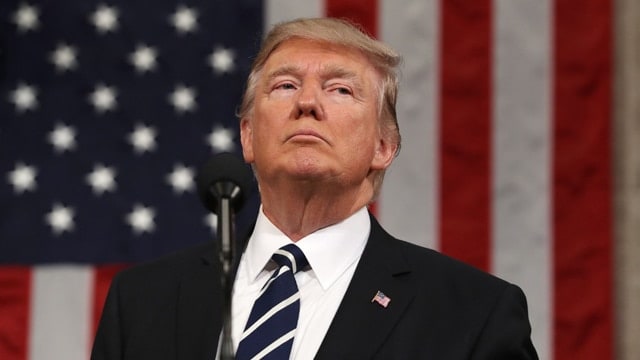 “After consultation with my Generals and military experts, please be advised that the United States Government will not accept or allow…Transgender individuals to serve in any capacity in the U.S. Military,” the president wrote on Twitter. (Photo: Jim Lo Scalzo/AFP)

In a series of tweets Wednesday morning, Trump said he determined, after consulting with “Generals and military experts,” that the “United States Government will not accept or allow transgender individuals to serve in any capacity.”

Most critics addressed Trump’s reasoning, which he cited as “tremendous medical costs and disruption,” by pointing out how little the U.S. has spent on medical care for transgender troops when compared to other medical treatment.

Estimated annual costs for transition-related medical care total $5.6 million, according to independent think tank the Palm Center, but other estimates pin it closer to $8 million. Many pointed to the comparison reported by The Military Times finding the military spending more than 10 times as much on erectile dysfunction medication for active duty servicemen and veterans.

Trump’s announcement is a reversal from last year’s decision by the Pentagon to end the ban on transgender people serving openly in the military. Exact figures are unknown, but the Pentagon estimates there are up to 7,000 transgender adults serving in the U.S. armed forces out of 1.3 million.

Reactions to the president’s failure to recognize service was swift. Kristin Beck, a retired transgender Navy SEAL, who served on the elite SEAL Team 6, called for a meeting with the president on the matter.

“Let’s meet face to face and you tell me I’m not worthy,” Beck said. “Being transgender doesn’t affect anyone else. We are liberty’s light. If you can’t defend that for everyone that’s an American citizen, that’s not right.”

“It’s an insult to transgender service members to refer to them as distractions,” said Sasha Buchert, a transgender woman who served as a sniper in the Marine Corps in the 1980’s. “We are people who are willing to lay down our lives for this country.”

Sen. Tammy Duckworth, a double amputee Iraq war vet, also spoke out. “I didn’t care if the American troops risking their lives to help save me were gay, straight, transgender or anything else,” she said, talking about the people who rescued her when her helicopter crashed in Iraq. In her prepared statement, she pointed out that the costs represent 0.13 percent of the military’s health care budget.

Caitlyn Jenner, a transgender Trump supporter and reality TV star, slammed the announcement and the president, saying transgender service members are “much braver than you, Mr. Trump; my allegiance is with them and our country, not you.”

Yet, some supported the president’s decision, basing their support on fairness for non-transgender people. “The position that it would have put women in to have to share birthing facilities and bathing facilities with biological and anatomical men, that really is what’s unfair,” said Mandi Ancalle with the Family Research Council, a conservative Christian public policy organization. “It’s really about the fairness of the policy as a whole. It’s really about ensuring that the military doesn’t incur these distractions and these high costs.”

At a press briefing Wednesday, White House Press Secretary Sarah Huckabee Sanders fielded questions on the president’s announcement, saying the decision is not meant to be anything more than a military decision. “The president has a lot of support for all Americans and certainly wants to protect all Americans at all times,” she said. “The president has expressed concerns since this Obama policy came into effect, but he’s also voiced that this is a very expensive and disruptive policy.”

The Pentagon has not commented on the president’s announcement, but per last year’s effort, new guidelines and services were to be implemented this summer.