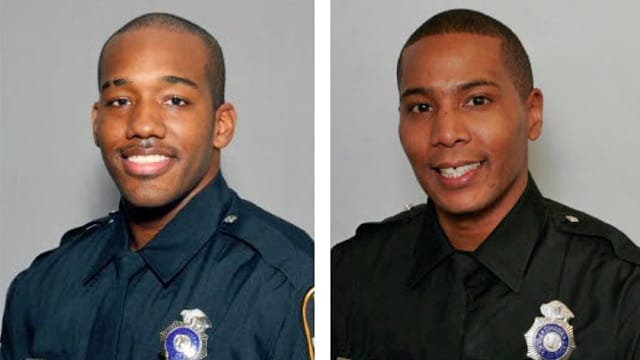 Two officers in Nebraska are facing assault charges in connection with a mentally ill man’s death earlier this year.

Douglas County Attorney Don Kleine revealed police video Wednesday, showing former Omaha officers Scotty Payne and Ryan McClarty repeatedly shocking 29-year-old Zachary Bearheels and punching him while he was on the ground. Payne is being charged with second-degree assault for shocking Bearheels 12 times, while McClarty is facing a third-degree assault charge for punching Bearheels 13 times, according to the Associated Press.

A Native American from Oklahoma, Bearheels was lost in Omaha after he’d been kicked off a bus there on June 5. The officers responded to a call at a convenience store of a man causing a disturbance. Police say he fought their efforts to take him into custody.

“Are you going to get into the car?” a female officer can be heard asking him in the video. “No?”

When Bearheels wouldn’t get up off the ground, Payne pulled the trigger of the stun gun — sending 50,000 volts into him. His legs darted around for a few seconds.

“Get up,” an officer said. That’s when Bearheels got free of his handcuffs and tried to flee. McClarty jumped on him, and punched him 13 times in less than 20 seconds.

Kleine said at one point during the struggle, Payne held the trigger on the stun gun for 18 seconds. “I don’t know that there’s any justification for that use of force,” he said.

Shortly after the scuffle, Bearheels was pronounced dead at a local hospital.

“Zachary Bearheels was simply a human being suffering from a severe mental illness that was quite obvious to anyone who came in contact with him,” Kleine said. “Our laws should protect those who are most vulnerable, particularly those who suffer from mental illness.”

An autopsy report showed Bearheels died from “excited delirium.” The coroner could not conclusively link the shocks or punching to his death. Payne and McClarty, both of whom are black, were fired from the police department earlier this month.

The police union in Omaha blasted Kleine, saying he should have let a grand jury determine whether the officers should have been charged. “These officers are entitled to a grand jury process and the ability to present a defense that includes all facts and evidence, not those cherry-picked for a press conference when the politics and pressure become too much to bear,” said a two page statement from the union.

“We didn’t rush this,” Kleine said, responding to the union criticism. “We took our time. We didn’t cherry-pick anything.”

While the union said Kleine went too far, several people in the Native American community criticized him for not going far enough, expressing outrage that the officers weren’t facing more serious charges.