Arizona man sentenced to 68 years for Battle of Bunkerville role 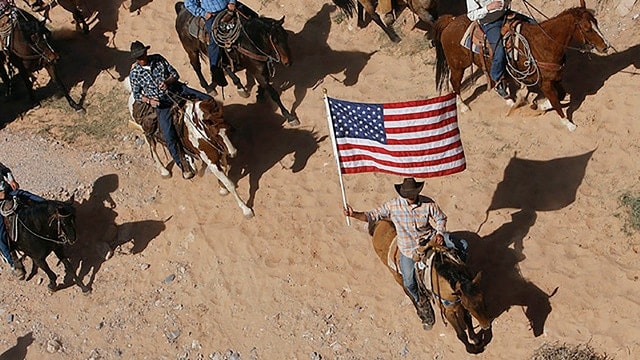 The scene in April 2014 at Cliven Bundy’s cattle ranch, in which armed ranchers and protestors faced off against Bureau of Land Management agents in a six day standoff. (Photo: Jason Bean/Las Vegas Review-Journal)

A federal judge in Las Vegas sentenced an Arizona man to more than 68 years in prison Wednesday for his role in the armed standoff at Cliven Bundy’s cattle ranch in 2014.

U.S. District Judge Gloria Navarro likened Gregory Burleson, 53, and other protestors to “playground bullies” before handing down the sentence, according to the Las Vegas Review Journal. Burleson was found guilty in April of eight counts, including threats against federal agents and assault.

“Gregory Burleson is a violent and dangerous man,” begins the summary of a sentencing memorandum, describing Burleson’s role in the standoff. “Burleson brought an AK-47, an AR-15, a shotgun, a .40 caliber handgun, a 9-millimeter handgun, 1,000 rounds of ammunition per weapon, a three-foot katana sword, a battle axe, body armor, and a gas mask.”

The “Battle of Bunkerville” was a tense, six-day standoff between dozens of armed ranchers and U.S. Bureau of Land Management officials in April 2014. People came from all over the country to support Bundy, who spent decades refusing to pay grazing fees to the federal government. The incident ended when BLM agents retreated. No shots were fired and no one was injured.

“They knew they were all dead meat once the first shot went off, no matter who shot it,” Burleson told undercover agents posing as a documentary film crew. “They knew that they would have died.”

“Burleson celebrated the victory he had that day, sharing how he had a federal officer in his sights and how he had brought a katana sword with him so to chop the officers’ heads off in the event he ran out of bullets,” court documents say.

Judge Navarro scolded Burleson before sentencing Wednesday. “You don’t just go to the tax office and threaten them to not collect taxes,” she said.

Prosecutors requested 87 years for Burleson, one of 19 people arrested and charged in connection with the standoff. He’s the second man to be sentenced in connection with the Battle of Bunkerville. In late May, New Hampshire native Jerry DeLemus was sentenced to more than seven years in prison after he pleaded guilty to conspiracy and interstate travel in aid of extortion.

A retrial is currently under way for four men who were also tried in April with Burleson. A jury deadlocked on charges for Scott Drexler, Eric Parker and Steven Stewart, all of Idaho, and Oklahoma native Richard Lovelien. A sixth man, Todd Engel was also tried and found guilty in April. He has yet to be sentenced.

Cliven Bundy, his sons, and two others will face a trial later this year, before a third trial for several more defendants begins.