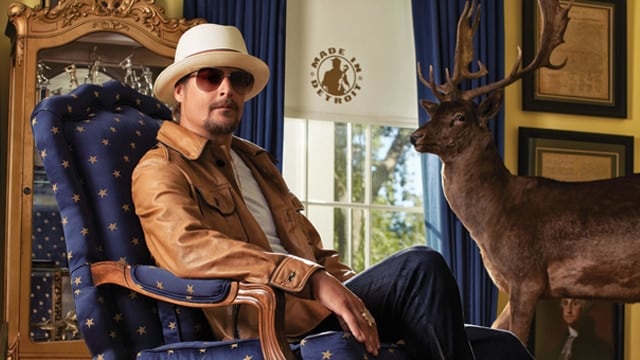 Three months after meeting with President Donald Trump in the Oval Office with Sarah Palin and Ted Nugent, rap-rocker Kid Rock is thinking about a possible run in Michigan for the United States Senate.

The Detroit native, who in 2015 told the Guardian he was “always buying more guns,” and that rap-rock “turned out to be pretty gay” announced in a post on his website Wednesday that he’s been taking the temperature on how people feel about him running, and will hold a presser in six weeks, allegedly to talk about whether he’ll throw his hat in the ring.

“We have over a year left until an actual election, so my first order of business is to get people engaged and registered to vote while continuing to put out my ideas on ways to help working class people in Michigan and America all while still calling out these jackass lawyers who call themselves politicians,” Kid Rock, real name Robert James Ritchie, wrote on his website.

While he tweaks his messaging, that 2015 Guardian piece offers a few clues about his views, and what his platform might look like.

“I am definitely a Republican on fiscal issues and the military, but I lean to the middle on social issues,” he said. “I am no fan of abortion, but it’s not up to a man to tell a woman what to do. As an ordained minister I don’t look forward to marrying gay people, but I’m not opposed to it.”

The 46-year-old grandfather thinks they should legalize and tax pot, cocaine and heroin. He said he didn’t vote for Barack Obama, but played at his inauguration because of the “exciting sense of change in the air.”

“That promise hasn’t been fulfilled – the country is more divided than ever,” he said.

Oh yeah, and he likes guns.

“I have everything from a Civil War cannon to an MP5 machine gun and old police guns,” he said, adding, “if someone invades your house, yeah, you can shoot them.”

On his use of the word “gay,” Kid Rock said, “if someone says you can’t say ‘gay’ like that you tell them to go fuck themselves.”

“You’re not going to get anything politically correct out of me.”

And while that sort of rhetoric is what helped elevate Trump to the nation’s highest office, Kid Rock told Rolling Stone last year that his relationship with the Turkish-born co-founder and president of Atlantic Records, Ahmet Ertegun, taught him a lot about how to behave.

“I learned a lot about having class,” he said. “How to speak to a lady, and kiss her on both cheeks, and that there’s a time to say ‘Fuck you’ and ‘Suck my dick,’ and then there’s a time when it’s not appropriate.”

“Because Ahmet and I would be as dirty as we’d want to be, and have as much fun on any level as you could think of, as old as he was. But then we’d have dignitaries with us, and he would be like, ‘Hey, none of that shit at the dinner table tonight, all right? Follow my lead!’”

While Kid Rock allegedly weighs a run for office, he says he’s creating a non-profit “for the promotion of voter registration.”

“I absolutely will use this media circus to sell/promote whatever I damn well please (many other politicians are doing the same thing, they just feed you a bunch of bullshit about it),” he wrote. “But either way, money raised at this time through the sale of merchandise associated with this very possible campaign will go towards our ‘register to vote’ efforts.”

In a ‘Kid Rock for U.S. Senate’ branded graphic on his website, he writes that, “I believe if you work your butt off and pay taxes, you should be able to easily understand and navigate the laws, tax codes, health care and anything else the government puts in place that affects us all.”

“One thing is for sure though,” he said, signing off from the note on his site announcing a possible run. “The democrats are ‘shattin’ in their pantaloons’ right now…and rightfully so!”

“And if I decide to throw my hat in the ring for US Senate, believe me… it’s game on mthrfkers.”