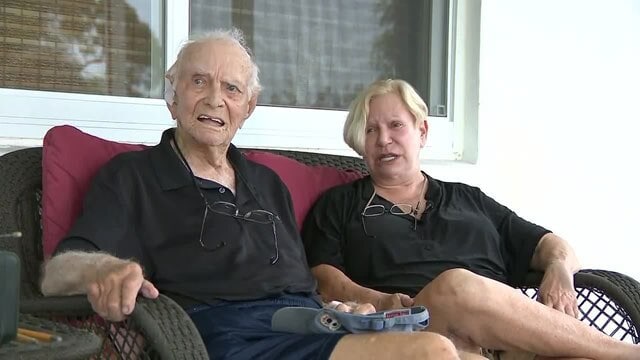 Louis and Irene Rosen thought nothing of it when their neighbor came over to borrow a cup of salt, but then he pulled a gun on them. (Photo: ABC)

A Florida man is behind bars after he attempted to rob his elderly neighbors at gunpoint Friday in their Tamarac home.

Louis Rosen, 99, and his 70-year-old wife, Irene, said the incident started when their neighbor’s son, 45-year-old Leonard Benitez, came to the door and asked to borrow a cup of salt.

“When your next-door neighbor asks to borrow salt, it makes perfect sense,” Irene told the Sun-Sentinel. “We had a nice conversation.”

Then, out of nowhere, Benitez pulled a handgun and a knife and demanded the couple’s bank account information so he could collect $50,000.

Irene said she was “scared to death,” while Louis said he was worried about his wife, but their worries intensified when the encounter turned physical and Benitez struck Louis in the head with his handgun.

Benitez held the couple hostage in their own home for about two hours before Irene was finally able to get free and call 911. Irene told a local ABC affiliate that the only time she truly became frantic was after she had escaped and left her husband inside the house as she went to get help.

But Irene managed to call for help and deputies arrived momentarily, sending Benitez fleeing from the Rosen’s home and back next door. However, as SWAT surrounded the home, Benitez decided to surrender.

Benitez was taken into custody, while Louis was transported to the hospital to receive treatment for cuts he sustained when Benitez struck him with the handgun. Though shaken, both Louis and Irene are expected to be okay.

Benitez was charged with home invasion with a firearm, kidnap/infliction of bodily harm or terrorizing, battery on a person 65 or older, and false imprisonment. Even though he is being held without bond, the judge warned Benitez to stay away from the couple.

“With the arraignment and the no-bond, hopefully that keeps him away,” Mark Salzman, Irene Rosen’s son who flew in from California after hearing of the incident, said of Benitez.

As for Irene, she said, “I try to think of the positive and say, ‘What an adventure we had,’ an adventure I could have done without.”