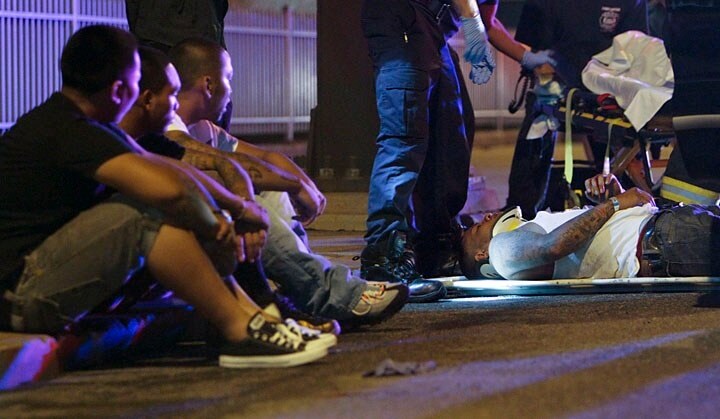 Officers watch over several males, two of which suffering from gunshot wounds, following a felony car stop at 6th Street and Race Street in Philadelphia following a shooting which occurred in the vicinity of 7th & Arch Streets. (Photo: Joseph Kaczmarek/GunCrisis.org)

Philadelphia officials announced Wednesday the formation of a new committee determined to stem the tide of gun violence in the city, which is at the highest level it’s been in five years. On Wednesday, the city tallied 177 homicides, a 16 percent uptick from last year, prompting the newly-formed Special Committee on Gun Violence Prevention to try to attack the problem from multiple angles.

“As a lifetime anti-violence advocate, I know that many gun deaths are the result of bad judgment, desperation, and physical proximity to a deadly weapon,” said Councilman Kenyatta Johnson, committee co-chair.

The committee will be focused on taking a cross-sector approach in trying to slow the city’s gun violence problem. That multi-pronged approach will be represented in the following six subcommittees: Illegal Guns, Public Health/Trauma Informed, Social Services/Opportunity, Intervention/Outreach, Program Review Team, and Victim Advocates.

The six subcommittees hope to address the many different factors that contribute to and aggravate the gun violence problem.

“While any one city is limited in what it can do about the gun industry, we absolutely can attack other factors – whether they are poverty, lack of educational opportunity, neighborhood disinvestment, and more,” Johnson said. “By bringing leaders in government, law enforcement, public health, and community engagement together, we can develop informed, comprehensive strategies that will be of service not just to Philadelphians, but to communities across the country.”

According to a news release from the Philadelphia City Council, the special committee will be co-chaired by City Managing Director Michael DiBerardinis and Darrell G. O’Connor, a former agent with the Bureau of Alcohol, Tobacco, Firearms and Explosives.

Other members of the committee include Councilman Curtis Jones Jr., chair of the Committee on Public Safety, and Shondell Revell, executive director of the newly authorized Office of Violence Prevention.