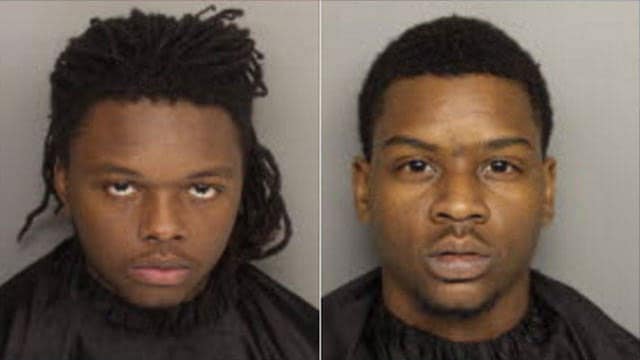 A South Carolina teen admitted in court Tuesday to the part he played in a smash-and-grab at a Simpsonville gun shop last year in which 43 firearms were stolen.

Richardson, who will be sentenced at a later date, faces up to 10 years in prison. Witherspoon was sentenced in May to serve 30 months in prison and pay $48,000 in restitution.

According to an affidavit, Richardson, Witherspoon, and a third suspect used a stolen minivan to ram into the front of The Gun Shop on Oct. 13. Once inside, they used sledgehammers and baseball bats to smash display cases and grab more than three dozen guns. The suspects then took off in another getaway vehicle, leaving the minivan behind.

The break-in occurred just before 3 a.m. and lasted less than a minute.

Investigators were able to identify and locate the two suspects using GPS tracking from a second stolen vehicle and surveillance video. In addition, authorities collected DNA evidence from a cigarette butt, and examined cell phone records, which included a text with the address of the gun shop and messages sent hours before the break-in stating “Ez” and “Kash.” Text messages between Richardson and Witherspoon also showed photos of guns and magazines located at The Gun Shop.

Approximately nine hours after the smash-and-grab, authorities showed up at Richardson’s Charlotte high school to serve a warrant for possession of a stolen vehicle. Richardson initially fled from police, but was apprehended after a brief foot pursuit. A search of Richardson’s book bag revealed a marijuana blunt, along with a Ruger LCP II, which was determined to be one of the weapons stolen from The Gun Shop.

Four days later, the North Carolina probation office conducted a check on Witherspoon’s brother, Tyquan. During a search of his bedroom, authorities found ammunition and, at the direction of Witherspoon’s mother, a search of a second bedroom was conducted. There, authorities found a Glock Model 30, which was determined to be one of the guns stolen in the smash and grab. Tyquan Witherspoon initially denied any knowledge of the weapon, but later admitted he was given the gun by his brother, Juran Witherspoon.

“The Simpsonville and Charlotte police, ATF, and the Lincoln County Sheriff, they pulled together to solve this one,” U.S. Attorney Beth Drake said earlier this year. “Working together for safer communities is what it’s about.”