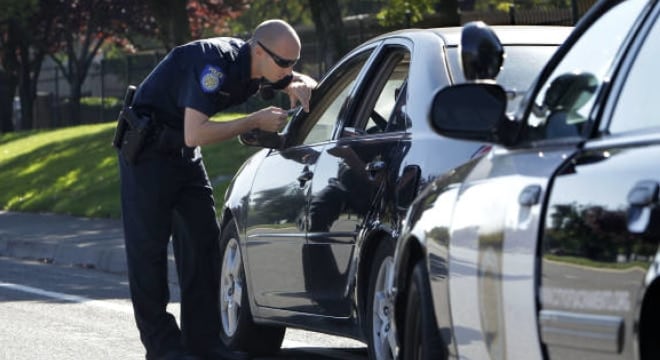 The states argue that current practice means a law enforcement officer can perform a frisk if a subject is thought both armed and dangerous, while the case they are challenging allows it if just suspected to be armed. (Photo: Rich Pedroncelli/AP)

Five states want to overturn a ruling that an officer is justified in searching a person if they suspect that that person has a weapon, even if it’s being carried legally.

Their amicus filing aims to protect Second Amendment rights of lawful gun owners to carry a weapon without law enforcement concluding an individual at a warrantless stop is “presently dangerous” and subject to a search.

The filing comes in the 4th Circuit Court of Appeals decision in the case of Shaquille Montel Robinson, who was stopped and searched by police in West Virginia for not wearing a seatbelt and found with a gun in his pocket. Robinson, a felon, had sought the evidence that he was armed suppressed, arguing the gun was found through an illegal search that violated his Fourth Amendment rights, citing that as far as the officers knew he could have had a permit and been legally armed.

In January, an en banc panel of the 4th Circuit decided 12-4 that Robinson’s logic was flawed. Judge Paul V. Niemeyer, who wrote for the majority, said that it was “inconsequential that the passenger may have had a permit to carry the concealed firearm” and that, “The danger justifying a protective frisk arises from the combination of a forced police encounter and the presence of a weapon, not from any illegality of the weapon’s possession.”

While recognizing the job of law enforcement is “both important and dangerous,” Morrisey outlines to the Supreme Court that the 4th Circuit’s ruling burdens the right to bear arms, saying the decision will “discourage at least some individuals from lawfully carrying a firearm.”

Noting that West Virginia has recently adopted permitless concealed carry and many lawful gun owners may carry without license to do so, Morrisey argues the lower court’s explanation that the possibility of having a gun at an interaction with police itself does not allow for a search unless such a frisk is “justified by an individualized determination that the subject of the frisk is both armed and dangerous.”

Speaking of the case, Texas Attorney General Ken Paxton, who has signed on to support Morrisey’s filing, says Second Amendment rights are in jeopardy should the 4th Circuit’s ruling be allowed to stand.