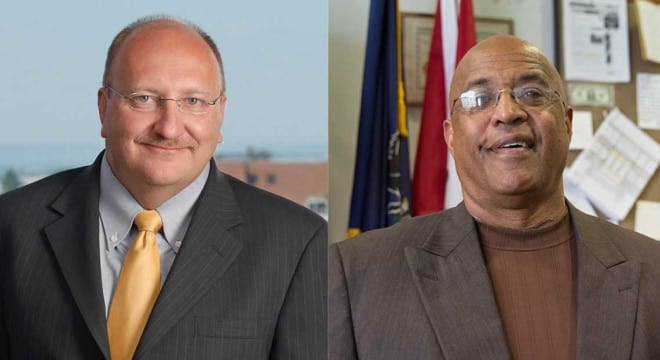 Pawlowski, 52, was hit with more than 50 charges ranging from bribery to conspiracy and allegedly accepted over $150,000 in campaign contributions in exchange for favors in a series of complex “pay to play” schemes. Spencer, 70, received a dozen similar counts.

“The mayor of Allentown and the former mayor of Reading charged in the two indictments unsealed today sold their offices to the highest bidder — violating the trust and confidence of the citizens of their cities,” U.S. Attorney Louis Lappen said. “Both mayors, working with other corrupt officials and businesspeople, directed lucrative contracts to companies who agreed to provide campaign contributions in exchange for work.”

Both mayors also had a lengthy history of supporting increased regulations on guns and how they are transferred. The two Democrats have been vocal members of former New York City Mayor Michael Bloomberg’s Mayors Against Illegal Guns, an organization founded in 2006 and is now part of the Everytown group.

Spencer joined other mayors at a 2013 press conference following the Sandy Hook shooting, which left 20 students and six faculty dead, to call for an assault weapon ban and expanded background checks. He was a regular speaker at other events sponsored by CeaseFirePA, an area gun control group.

Pawlowski appeared in MAIG ads, frequently posts about gun politics on his social media account, called for expanded background checks on the national level, and last year penned an extensive op-ed in the wake of the Orlando nightclub shooting that left 49 dead, blaming the gun lobby for legislative inaction on stronger gun laws.

Both mayors were adamantly opposed to Pennsylvania’s Act 192, a now-vanquished law that allowed civil rights groups to stand in for citizens in suits against local gun laws that were stronger than the state had on the books. Besides speaking publicly against the preemption enforcement measure, they signed on as supporters to challenge to the law in Commonwealth Court, and moved to quickly restore local gun control ordinances once Act 192 was overturned.

As for the corruption investigation, each mayor is denying the charges. “I’m disappointed about the filing of these allegations against me,” said Pawlowski, “But I want to make it clear to everyone, I have done nothing wrong.”

Spencer’s attorney, Geoffrey Johnson, vouched for his client to the Reading Eagle, saying, “Vaughn intends to defend these charges vigorously.”