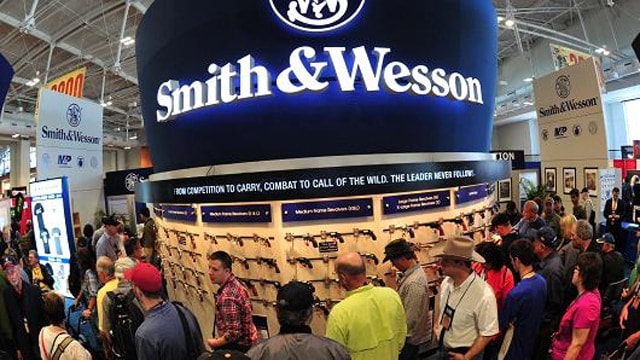 American Outdoor Brands, the holding company for Smith & Wesson, isn’t selling product fast enough for some investors — raising doubts about the validity of the company’s forecasted profits in 2018.

In June, the “rugged outdoors” conglomerate — which includes Smith & Wesson among its portfolio of brands — announced record-breaking profit for 2017 topping $903 million. Despite this, the company’s top executives said extra inventory and a promotion-heavy environment would eat into first and second quarter revenue, depressing the 2018 total to roughly $750 million.

“I understand the firearms industry is very cyclical and that it isn’t realistic to expect a company in that industry to grow revenue impressively in a perfect upward trajectory every year,” said Kevin Mackie, a self-described long-term buy-and-hold investor who writes for Seeking Alpha. “Nonetheless, and in light of heavy acquisition activity by AOBC of late, I believe that low of guidance points to more than cyclical or even political headwinds.”

Mackie analyzed AOBC’s inventory trends beginning in third quarter 2016 and found, despite a decrease in demand, the company continued making new products at a compounded quarterly rate of 11.76 percent. Worse yet, Mackie argues, AOBC’s stock of raw materials and “works in progress” remain flat while the inventory has doubled.

“In a healthy company, you want to see the opposite, where raw materials and works in process go up but finished goods stays flat. This shows that demand is strong, that in spite of increased production there is no stockpiling of aging inventory,” he said in an article published Sunday. “But at AOBC currently, inventory is ballooning.”

Mackie — like many other industry analysts — blames the election for the inventory overload: when Hillary Clinton didn’t bring her gun control agenda to the White House, an oversupply of firearms, ammunition and accessories were left unsold.

But, he says, the political fallout hasn’t discouraged AOBC from ramping up production, teasing new products and acquiring more brands — including Gemini Technologies and Bubba Blade, both within the last month.

“This is a messy recipe, and I fear severe discounts, write-downs, write-offs, and margin contractions in coming quarters,” Mackie said. “Are the promos being done to increase market share, or is the company getting desperate to unload aging inventory?”

“Are they being honest about things, or are they trying to hide a dire situation? Considering the low guidance given for 2018, I am inclined to believe the latter,” he concluded.

Not all investors see AOBC’s recent moves this way, however, with Motley Fool contributor Rich Duprey praising the company’s foresight for entering into the suppressor market with Gemtech.

“Although American Outdoor Brands didn’t say how much it paid for Gemtech, it was probably at a discounted price,” he said in an article published Sunday. “If the Hearing Protection Act does get approved, it ought to open the floodgates of pent-up demand as well as introduce more gun enthusiasts into the market. By acquiring one of the leaders in the field now, American Outdoor Brands is making sure it will make a lot of noise when it happens.”