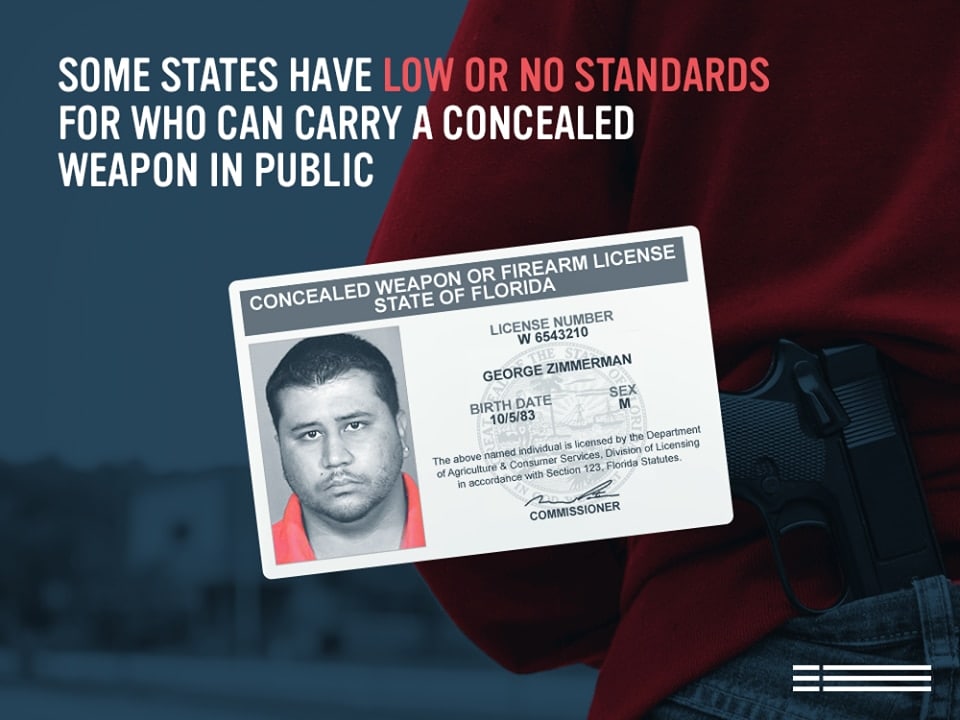 Moms Demand Action and Everytown for Gun Safety over the weekend began running a meme showing a Florida state concealed weapon license purportedly owned by George Zimmerman layered over a person with a Marksman air pistol shoved haphazardly into the waistband of their jeans.

“Some states have low or no standards for who can carry a concealed weapon in public,” says the text over the ad.

“The NRA’s latest pet policy would make the weakest state gun laws the law of the land, allowing dangerous people to carry concealed guns in every state in the country,” said Moms Demand Action in the post urging lawmakers to decline support for a pair of national concealed carry reciprocity bills.

The measures, the H.R. 38 and S.446, respectively, would expand carry rights nationwide, in effect forcing states and local jurisdictions to respect all valid concealed carry permits, a move the advocates feel is a mistake which would lead to a “race to the bottom” to recognize permits from states with no training requirements and slim vetting.

The groups, backed by former New York Mayor Michael Bloomberg have retained a big-name Washington, D.C.-based advocacy firm to help with future legislative pushes and has promised to spend as much as $25 million to defeat the push.

Ironically, despite the one-two punch of the meme, Florida — once seen as the leader for concealed carry law reform — now has one of the more demanding processes in the country to obtain such a permit, especially among other “shall-issue” states.

Applicants have to prove they have had prior firearms training, pay as much as $112 in fingerprinting, licensing and convenience fees for initial licenses, and wait up to 90 days for a permit. The state denied 6,470 licenses in the year between July 2016-June 2017, about half for incomplete documentation, and half for “ineligible” applicants.

Further, Florida law prohibits both concealed carry without a license and open carry altogether except under narrow circumstances. By comparison, licenses in neighboring Georgia and Alabama are both generally cheaper and do not require training. Meanwhile, at least a dozen states, including Mississippi– just an hour away from the West Florida line– have adopted permitless carry laws, and 45 states allow for open carry.