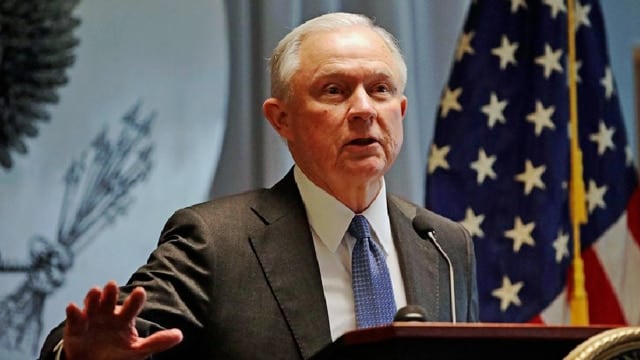 U.S Attorney General Jeff Sessions last week credited a shift in priorities in the Justice Department for triggering a big jump in the number of people charged in federal court with weapons violations.

On Friday, Sessions explained the number of defendants charged with unlawful possession of a firearm increased in 2017’s second quarter to 2,637, up from 2,149 in the same period last year. The former Alabama Republican senator, narrowly confirmed in February to his post as the country’s top lawman, attributed the increase in part to a memo he sent in March to federal prosecutors directing them to target violent crime with a concentration on a number of statutes — including several dealing with firearms offenses.

“In the first three months since the memo went into effect, charges of unlawful possession of a gun – mostly by previously convicted felons – are up by 23 percent,” Sessions said. “That sends a clear message to criminals all over this country that if you carry a gun illegally, you will be held accountable. I am grateful to the many federal prosecutors and agents who are working hard every day to make America safe again.”

According to data from the Executive Office for United States Attorneys, in the last fiscal year, some 11,656 defendants were charged with firearms offenses while projected numbers for the current year are on pace to charge 12,626, an overall increase of eight percent. If the figure is reached, officials say it would be the highest number of federal firearms cases since 2005, under the administration of President George W. Bush.

Sessions crafted the memo after input from the newly established DOJ Task Force on Crime Reduction and Public Safety. Established by Executive Order from President Trump just three weeks after his inauguration, Sessions last month expanded the initiative into a partnership with a dozen cities in an effort to combat violent criminals, specifically those involved in gun crime, drug trafficking, and gang violence.

The National Rifle Association, who strongly supported both Trump’s candidacy and Session’s confirmation, applauded the news from DOJ. “The Department of Justice report released today shows the administration’s commitment to getting violent criminals and gang members off our streets,” said Chris Cox, executive director of the NRA’s lobbying arm. “After suffering an all-time low during the Obama administration, federal prosecutions of illegal firearm possession are now being taken seriously.”