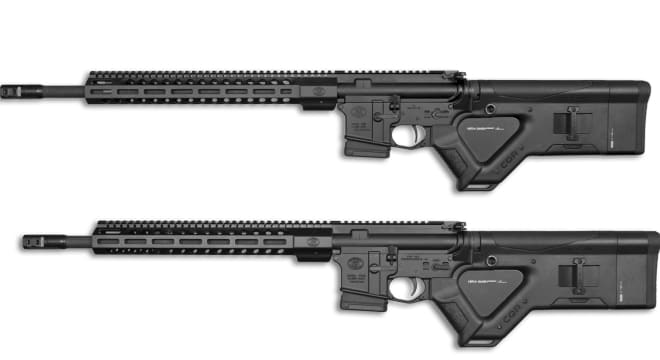 The models, the FN 15 Tactical Carbine II CA (bottom) and FN 15 DMR II CA (top), both use Hera CQR “featureless” stocks and 10-round Magpul PMAGs in a nod to the state’s new laws on so-called “assault weapons.” (Photo: FN)

In an effort to keep the estimated 13 million gun owners in California supplied with a state-compliant MSR, FN on Monday announced two new FN-15 rifles.

The models, the FN 15 Tactical Carbine II CA and FN 15 DMR II CA, both use Hera CQR “featureless” stocks and 10-round Magpul PMAGs in a nod to the state’s new laws on so-called “assault weapons.”

“Many of California’s pro-gun residents have had very limited options in terms of what they could purchase because of the state-imposed regulations on firearms,” said John Keppeler, vice president of sales and marketing for FN America, in a statement. “FN saw California’s market as an opportunity to expand the FN 15 line.”

Both guns use a hard-anodized aluminum flat-top receiver, M1913 top rail, and M-LOK handguards. Each come standard with a Surefire ProComp 556 muzzle brake.

The Tactical model uses a 16-inch cold hammer-forged, chrome-lined free-floating barrel with a mid length gas system and what FN bills as their “Combat Trigger.”

The slightly longer DMR has an 18-inch barrel with a 1-in-7-inch twist and is equipped with a 3.5-pound Timney match trigger.

FN says the Tactical is currently shipping to distributors priced at $1,799 while the DMR is expected to ship within the next few weeks at a $2,099 MSRP.