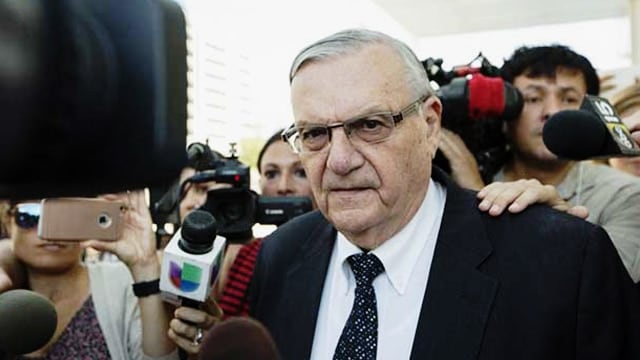 Joe Arpaio served as sheriff in Maricopa County from 1993 to 2016. (Photo: Associated Press)

Arpaio was charged with contempt just two weeks before last fall’s election — one he’d go on to lose. In the end, it was Sheriff Joe’s own words that sealed his fate this week. More than a dozen quotes were outlined in a ruling handed down from U.S. District Judge Susan Bolton, citing his “flagrant disregard” of a court order that barred him from rounding up undocumented immigrants.

In 2007, a group of Latinos filed a class action suit against Arpaio, alleging his department’s policies led to discrimination against them. In December 2011, a federal judge issued a temporary injunction barring Arpaio “from detaining persons for further investigation without reasonable suspicion that a crime has been or is being committed.” The order was meant to keep Arpaio from detaining people solely because of their immigration status.

But Arpaio was defiant, and admitted to violating the order. Bolton’s ruling Monday outlined several instances of Arpaio telling the media he’d continue his ways in the face of the 2011 ruling.

“Why are they going after this Sheriff? Well we know why. Because they don’t like me enforcing illegal immigration law,” Arpaio was quoted as saying in an April 2012 interview with CBS.

“I’m not going to give it up,” he told Fox News a month later. “I’m going to continue to enforce state laws and federal laws.”

Still, in court, his lawyers argued the 2011 ruling was unclear, and that violations were unintentional.

All told, Arpaio’s legal troubles have cost taxpayers in Maricopa County more than $50 million. The 85-year-old is set to be sentenced on Oct. 5, but attorneys say he plans to appeal the ruling and press for a jury trial.

“Joe Arpaio is in this for the long haul,” said a statement from his lawyers. “And he will continue to fight to vindicate himself, to prove his innocence, and to protect the public.”