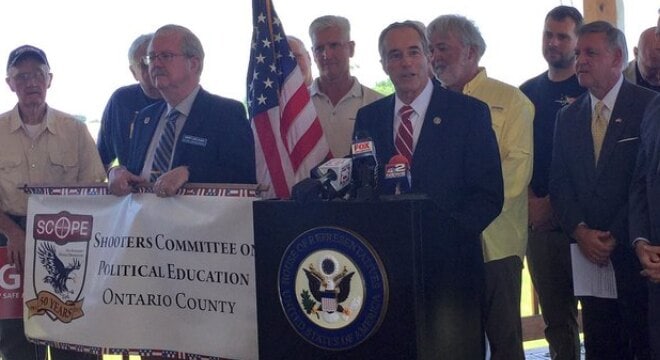 A New York Republican filed a measure in the U.S. House last week that would limit the authority of states to regulate rifles and shotguns.

The bill, designed to repeal much of the controversial New York SAFE Act and other similar laws, is named the Second Amendment Guarantee Act. Filed by U.S. Rep. Chris Collins, the bill would preempt state and local governments from enacting a regulation on rifles and shotguns that are in excess of federal law.

“This legislation would protect the Second Amendment rights of New Yorkers that were unjustly taken away by Andrew Cuomo,” said Collins in a statement. “I am a staunch supporter of the Second Amendment and have fought against all efforts to condemn these rights. I stand with the law-abiding citizens of this state that have been outraged by the SAFE Act and voice my commitment to roll back these regulations.”

Filed as HR 3576, the three-page bill would strip away the ability to craft and implement bans and regulations on rifles and shotguns and their accessories such as magazines that have been produced or sold through interstate commerce, thus making assault weapon bans in states like California, Connecticut and New York largely unworkable. States could still regulate firearms made inside their jurisdictions as well as handguns and ammunition.

Although the federal assault weapon ban sunsetted in 2004, at least seven states have passed their own blanket prohibitions while local bans exist in the District of Columbia and parts of Illinois and Indiana.

New York Gov. Andrew Cuomo, who signed the SAFE Act into law in 2013, slammed Collins’ effort as a “blatant political ploy” that was brought about by special interests.

“This disturbing bill puts New Yorkers in harm’s way — and to make it worse, there is no basis for it. None,” said Cuomo in a statement Monday. “The courts have resoundingly upheld New York’s law as consistent with the Constitution. We understand that Washington is in turmoil right now — we just ask that they don’t do anything to set back the progress we’ve been able to make despite them.”

The measure has been referred to the House Committee on the Judiciary.