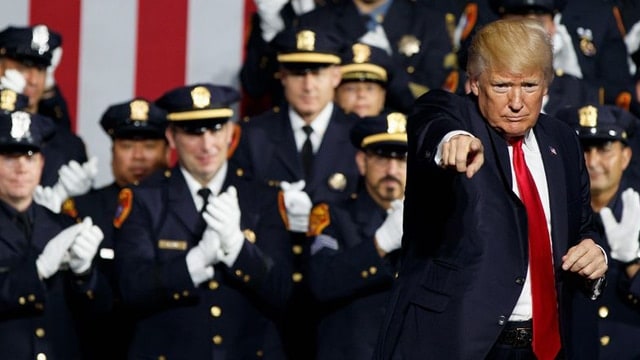 In an apparent joke Friday, President Donald Trump told officers during a speech in New York not to “be too nice” to suspects — a comment that’s drawing mixed reactions from police and other groups.

The president made the remarks at Suffolk County Community College on Long Island during a speech about the government’s crackdown on the MS-13 street gang.

“When you see these towns and when you see these thugs being thrown into the paddy wagon, you just see them thrown in, rough. I said, ‘please don’t be too nice,’” said Trump. “Like when you guys put somebody in the car and you’re protecting their head, you know? The way you put their hand over. Like, don’t hit their head, and they’ve just killed somebody? Don’t hit their head? I said, ‘You can take the hand away, OK?’”

The crowd laughed and applauded the comments, but not everyone thought the joke was funny. Police departments nationwide assured the media and residents that the president’s remarks did not reflect any sort of policy change, and that officers will continue to build trust in their communities.

‘‘Over the past two or three years, police departments have worked very, very hard to restore the loss of confidence and trust that people, particularly in the African-American community, have in the police, based on what happened in Ferguson and the other high profile shootings,’’ said Darrel Stephens, a former police chief and the executive director of the Major Cities Chiefs Association.

‘‘It sort of reinforces that there’s sort of a wink and a nod about these things, when that’s simply not the case,” he said.

The NAACP Legal Defense Fund referenced the death of Freddie Gray in Baltimore in its condemnation of the remarks.

“The President’s mocking of the treatment of arrestees as they are escorted into a police vehicle is particularly reprehensible in light of the police in-custody death of Freddie Gray in Baltimore, where this administration’s Justice Department has attempted to impede the implementation of much-needed policing reform,” said a statement from the legal defense fund.

Bill Murphy, a lawyer for the Gray family, said the president should be condemned for the comments.

“For a president of the United States to encourage the police with a wink and a nod to be violent to citizens … shows that the president is not in any way committed to justice for all people,” Murphy said.

Others felt the comments were being overblown. “Do these people actually realize that this was a joke and not a policy change?” said a post on the Blue Lives Matter website. “It seems not.”

“The president knows, just as every cop out there knows, that our society does not, and should not, tolerate the mistreatment or prejudgment of any individual at any point in the criminal justice process,” Canterbury said.