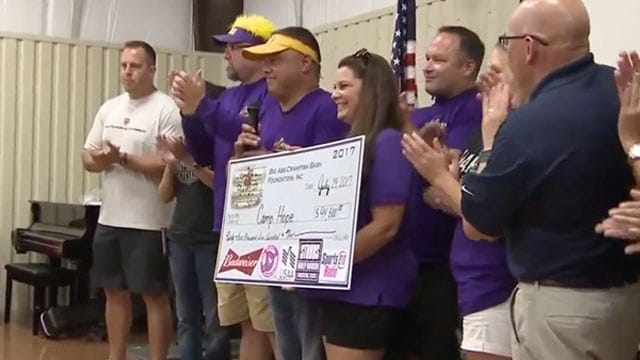 A giant check worth $94,500 is presented at Camp Hope in Houston over the weekend. (Photo: KPRC)

Several veterans in Houston will get to go to a PTSD camp with their families for free after a charity donated more nearly $100,000 last week.

A group of bikers put on the last round of fundraising for the Bigass Crawfish Bash Foundation over the weekend, according to KPRC.

The fundraiser culminated in a barbecue lunch Saturday at Camp Hope, the interim housing facility for veterans who spend six months getting treatment.

“It basically allows us to not charge anybody a dime for our services,” said David Maulsby, the executive director of Camp Hope.

Alexander, who served in Iraq, said the camp saves lives.

“There are a few places we wind up, in jail, in a coffin or in the streets,” said Alexander. “If it wasn’t for Camp Hope, I wouldn’t be here today.”

“They are the real heroes,” said Quentin Severin, a co-founder of the charity. “They have saved lives and saved families.”

On top of the donation, the charity also set a world record, boiling more than 58,000 pounds of crawfish at this year’s boil.