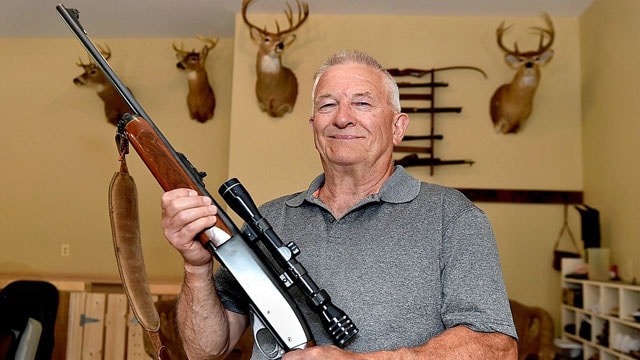 Don Hall, 70, is happy to have his guns back after a harrowing ordeal with authorities in New York. (Photo: The Post Standard)

A 70-year-old Vietnam War veteran recently spoke with reporters about an incident earlier this year in which six of his guns were confiscated by authorities in Taberg, New York, after he was incorrectly flagged as “mentally defective.”

“I was guilty until I could prove myself innocent,” Don Hall told The Post Standard. “They don’t tell you why or what you supposedly did.”

After several months, Hall finally got back his guns, but not before a great deal of legal battles and red tape that left him feeling frustrated.

Hall said, back in February, he was watching television with his girlfriend, Connie Heidenreich, around 9:30 p.m. when a group of Oneida County sheriff’s deputies showed up at his house. He said his first thought was that something had happened to someone in his family.

But that’s not why they were at Hall’s home.

After confirming Hall’s identity, the deputies announced they had a deposition and were there to take his guns. The news left Hall dumbfounded, but he obeyed the orders of the officers and retrieved his two handguns.

Then, the deputies asked if Hall had any long guns, which he did. Hall, who had no history of mental illness, handed over four long guns, but when he questioned why, specifically, they were taking his firearms, they couldn’t provide him with an answer. In fact, according to Hall, the officers, who apologized throughout the process, admitted that they had never confiscated anyone’s guns before and had no clue why they were there other than the “mentally defective” stamp on the deposition. Their guess was that it had something to do with the SAFE Act, Hall said, which requires health care providers to report any patients whom they believe to be a danger to themselves or anyone else.

Nonetheless, Hall complied, but the following morning, he was on the phone in an attempt to find some answers – and get back his guns. It wasn’t long before Hall decided to hire a lawyer.

At the direction of his lawyer, John Panzone, Hall secured affidavits from local hospitals to prove he was not recently treated for any mental health issues. And while Panzone finally convinced a judge that there had been a mistake, it was Hall’s own investigative work that uncovered where the indiscretion occurred.

As it turned out, the hospital where Hall had undergone a sleep apnea test four years ago had a patient who shared the same name as Hall and also had a similar social security number. That patient was previously treated for a mental health issue, and Hall and Panzone believe that’s where the mix-up occurred.

After Panzone convinced Oneida County Judge Michael Dwyer of the mistake, the judge ordered to have Hall’s guns returned.

However, some six months later, although Hall now has his guns, no one in the medical community has taken responsibility for the mistake, nor has Hall received an apology from anyone, save the deputies as they confiscated his guns by order of the deposition. In fact, Caitlin McCann, a spokeswoman for the Mohawk Valley Health System, said they have no knowledge of any such misidentification.

Furthermore, although Hall and Panzone originally believed the guns were taken under the SAFE Act, the state Office of Mental Health confirmed that his case – or rather the other Don Hall’s case – was reported under the Brady Handgun Violence Prevention Act, not the SAFE Act.

Nonetheless, regardless of how Hall was flagged, Panzone said he’s shocked it went as far as it did without anyone catching the mistake.

“I’m surprised it sailed through the way it did with a man who has a spotless record,” Panzone said. “To me, presumption of innocence is the foundation of our system, and this provision doesn’t allow for that.”

It’s unclear if authorities ever located the correct Don Hall.