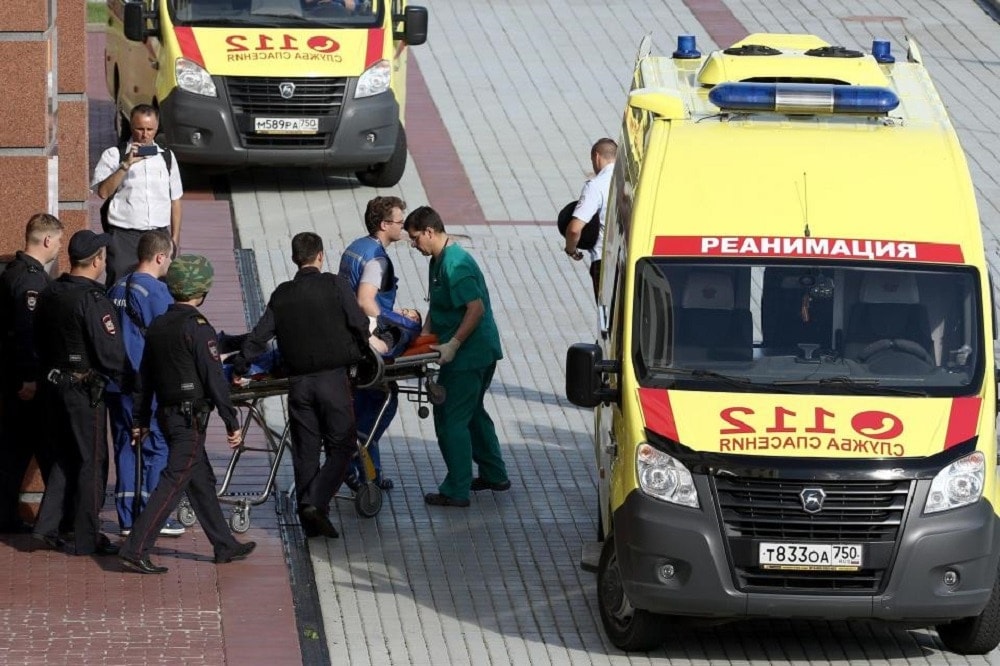 A wounded victim being carried to an ambulance outside the Moscow Regional Court. (Photo: AP)

Five murder suspects stole guns from guards at a Russian courthouse Tuesday, leading to a bloody shootout that left three of the suspects dead and two guards injured.

ABC News reported the escape attempt started in the Moscow Regional Court as a pair of guards escorted five suspects, known members of the so-called Grand Theft Auto Gang, accused of murdering 17 motorists around Moscow from 2012 to 2014. The assailants attacked the guards in an elevator and wrested their guns away, while one of the guards was able to sound the alarm.

Court spokeswoman Natalya Osipova said the suspects captured the two guards, taking them hostage, and then encountered more security forces as they exited the elevator. A flurry of gunfire ensued in which three of the suspects were killed and two others wounded.

One guard was wounded in the shootout and was rushed to a local hospital. The two captured guards also suffered injuries and were hospitalized. One of the captured guards described the assault, saying the suspects beat her with their fists and the guns they had stolen.

The attackers were all from ex-Soviet Central Asia and part of the criminal organization, named after the violent video game. From 2012-2014, the 14 gang members killed a total of 17 motorists by placing spikes on the road, forcing people out of their vehicles and then ruthlessly shooting them dead.

Police were able to track down the gang members after finding a firearm and other evidence left at one of the murder scenes. The suspected leader of the gang, originally from Uzbekistan, was killed in a 2014 shootout, and his brother was killed by security forces on Tuesday.

Prosecutors are asking for life sentences for the nine suspects that have been on trial since the summer of 2016, while another four suspects have yet to be arrested.