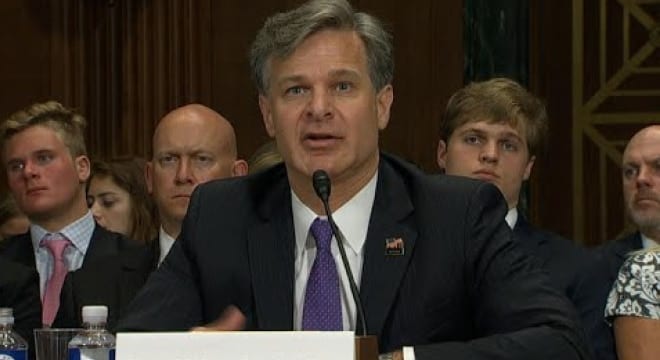 Christopher Wray was confirmed 92-5 this week by the Senate. (Photo: CSPAN)

Former U.S. Assistant Attorney General Christopher Wray sailed through an easy confirmation vote in the Senate on Tuesday to lead the Federal Bureau of Investigation.

Nominated by President Trump in June, Wray, 50, was approved 92-5 with a mixed bag of Democrats casting “no” votes and two Republicans, U.S. Sens. John McCain and Richard Burr, not voting.

A Yale Law School graduate, Wray served in a number of Justice Department positions including as an assistant U.S. Attorney for the Northern District of Georgia and the assistant attorney general in charge of the DOJ’s Criminal Division under President George W. Bush, with the latter position bringing unanimous confirmation from the Senate in 2003. Wray left public service two years later and has been in private practice ever since, including involvement in some cases that drew scorn from the American Civil Liberties Union and others.

During hearings earlier this month before the Senate Judiciary Committee, Wray was asked a myriad of questions by the panel with Connecticut’s Sen. Richard Blumenthal pressing the nominee on the subject of gun control.

“Let me switch to a different topic, you have mentioned the scourge of gun violence in this country,” Blumenthal said. “Would you support common sense measures to stop gun violence? As you know, I have championed a number of them along with others on this committee and in the Senate, including universal background checks. Would you support that kind of measure?”

Wray replied: “I would want to take a look at any specific legislative proposal and get back to you once I had evaluated a specific piece of legislation. But I do support efforts to deal with gun violence aggressively and effectively and I think my record — both as a line prosecutor and in the leadership of the department — is consistent with that.”

The nominee had the support of dozens of former U.S. attorneys including Obama-era U.S. Attorney General Eric Holder who signed a letter saying he “is a strong and effective leader with unassailable integrity, judgment, and courage.”

The FBI, with 35,000 employees and a budget in excess of $8 billion, is the principal federal law enforcement, counterintelligence and counter-terrorism organization. Wray will take over from acting Director Andrew McCabe, who had been leading the agency after the dismissal of FBI Director James Comey in May.