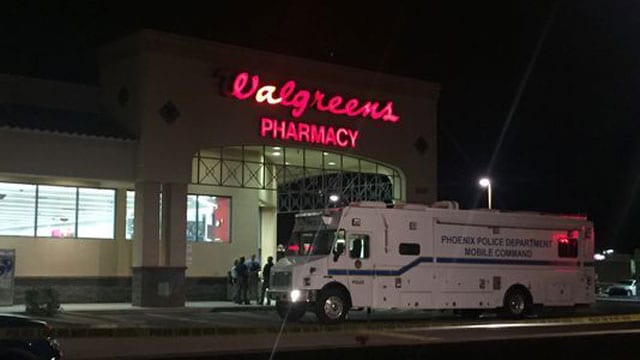 Authorities described the scene as “chaos” when an armed robber stormed Walgreens and demanded oxycodone from the pharmacist. (Photo: Josiah Destin/The Republic)

An attempted robbery at a Phoenix drug store Tuesday evening was foiled by a customer who was legally carrying a concealed handgun.

The suspect, who died at the scene, was identified as 30-year-old Stephen Holguin.

Holguin entered the Walgreens around 6:30 p.m. According to witnesses, he was wearing a wig and aiming a gun at customers and employees alike as he jumped over the pharmacy counter and demanded oxycodone from the pharmacist.

It’s unclear how or when the armed customer, who has not been publicly identified, intervened, but Holguin did not make it out of the pharmacy unharmed.

When police arrived on the scene, Holguin was suffering from a gunshot wound and hiding in a back room of the business. Authorities used the assistance of a police dog to apprehend Holguin, who was still armed when they arrived. Despite first responders’ efforts to save Holguin, he died at the scene.

There were about a dozen employees and customers inside the business at the time of the attempted robbery. Sgt. Jonathan Howard, spokesman for the Phoenix Police Department, said the scene was “full of chaos.”

Walgreens customer Janice Gordon-Caddy told reporters she showed up about 15 minutes after the attempted robbery and subsequent shooting and witnessed part of the aftermath.

“I saw the workers from the pharmacy running out with their hands raised in the air. They were crying and screaming,’’ Gordon-Caddy said.

“Next thing I know, the SWAT team and all the police officers and everybody (is) going in with their guns,” she said. “It was just a madhouse, that probably would have been much worse if there hadn’t been a customer in there armed.”

Howard said they talked with the armed citizen, who is fully cooperating with the investigation but asked not to be identified and declined interviews with the media. No charges have been filed against him at this time, as it appears he acted in defense of a third party.

“At this point, it seems to be a case of a good Samaritan in the right place at the right time,” Howard said.

Pharmacy robberies have become all too common as opioid abuse continues to reach epidemic proportions in many areas of the country. According to the American Society of Addiction Medicine, drug overdose is the leading cause of accidental death in the United States, claiming more than 52,000 lives in 2015 alone, an increase of approximately 400 percent since 1999. Arizona alone saw just under 800 opioid deaths in 2016, a 16 percent increase from the previous year.

Likewise, a number of heroin users admit their addictions started with prescription opioids, but led to the use of heroin because it’s cheaper and easier to obtain than prescriptions. According to the Center for Substance Abuse Research, the average cost, per pill, for oxycodone is around $4. The same pills, however, have a street value varying anywhere from $25 to $40 a pop, while a single dose of heroin can be bought for around $15.