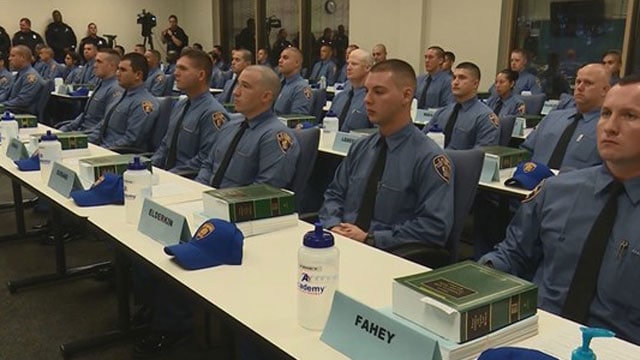 The San Antonio Police Department welcomed more than 50 cadets to the force this week. (Photo: Ken 5)

More than 50 cadets began training with the San Antonio Police Department on Monday, but despite the largest class size in years, the department still has more than 100 vacant positions to fill.

“We have, on average, about five to six officers leaving the department on a monthly basis,” San Antonio City Manager, Sheryl Sculley, told reporters. “We have a force of 2,400, so we’re constantly recruiting.”

The newest class, which will graduate in March, is made up of more than 40 men and half dozen women. Currently, women make up only 10 percent of the force, a number the department hopes will soon increase.

But despite the low number of female officers, Sculley said the department has racial diversity.

“Our department is very racially diverse,” she said. “It reflects the community we serve, and we know that one area that we need improvement is more women within the ranks and within the upper ranks.”

And the department offers competitive salaries and benefits packages as an enticing incentive for both men and women to join the ranks.

Cadets start out at just over $40,000 a year, and the base salary for a 30-year veteran is nearly $78,000, but education levels, prior experience, second languages, and shift differentials can add to base pay. Department specialties – which can include field training, a helicopter unit, and drug recognition, to name a few – contribute to an increase in salaries as well.

In the state of Texas, the San Antonio Police Department ranks second behind Austin in terms of pay and benefits and is significantly better than a number of smaller departments nationwide.

Of course, those who choose a career in law enforcement rarely do so simply for monetary compensation.

“It’s been something I’ve wanted to do since I was a child,” said San Antonio Police Cadet Channing Hill.

“Working with the police department, I felt that was the best opportunity to work with the community and keep people safe,” Hill added.

And it’s not a career that comes without dangers either. In fact, four officers have been killed in the line of duty in the state of Texas so far this year, and 72 nationwide, according to Officer Down Memorial Page, a website that tracks law enforcement deaths.

“That’s something that we realize when we sign up for the position, that that’s a possibility that could happen,” Hill said. “We pray and hope that never does happen and we don’t come to that.”

Hill acknowledged the position would be a challenge, but said, “It’s going to be worth it in the end.”