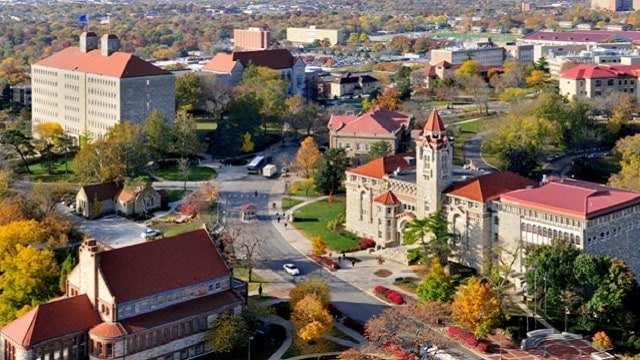 It is now legal to carry concealed firearms on Kansas college campuses, and reactions to that new reality have so far been mixed.

The law that was originally passed in 2013 took effect on July 1, allowing lawful gun owners 21 and older to carry concealed guns on college campuses throughout the state. Reactions among students, who can now carry firearms in their dorms and classrooms, have so for been lukewarm, KCTV5 reported.

University of Kansas student Megan Jones, founder of the Fail Campus Carry group that sent a letter to U.S. embassies warning them of the new law, said she planned on leaving the university now that guns were allowed on campus.

“Universities can ban toasters in people’s dorm rooms because of the fire risk but they’re not going to be allowed to ban a gun,” Jones said. “People are going to die as a result of this law.”

Professor Phillip Nel called the new law “insane” and said he will be working from home during the fall semester while trying to look for a position elsewhere.

“The possibility that someone is carrying a gun is the threat as much as someone actually carrying the gun is a threat because it changes the climate,” Nel said. “It changes the way we go about our business.”

Nel also noted that Kansas does not require gun owners to get a permit or extra training in order to carry concealed firearms.

Nel is not the only professor to speak out against the law, as former KU professor Jacob Dorman publicly resigned over the issue in May and published his resignation letter in the Topeka Capital-Journal.

While some parents also voiced concerns, recent Kansas State University graduate Derek Cox said he supports the new law and even testified during a hearing in the state legislature in support of campus carry.

In an opinion piece published by the Kansas City Star, Cox explained his position and said he hoped it would lead to students learning more about firearms.

“We go to college to learn to think critically, but we have professors and others who ignore the facts and fail to use basic logic skills when it comes to the Second Amendment,” Cox said in the piece. “I hope Kansas will attract the minds who can challenge students and simultaneously see the logical fallacies of the anti-gun movement. I can only hope educated discussion continues.”

Cox also told KCTV5 that he thought those who support gun rights on college campuses have not been properly represented.

“I think I’m giving the students who don’t feel comfortable speaking out a voice. I think they are the silent majority,” Cox said.

Cox continued: “We always talk about if we could take all of the guns away and save one life that would be worth it. Well, what if we introduced guns and we could save one life or more than one life, would that not be worth it? I think the argument goes both ways.”

“This is an opportunity for law abiding students and Kansas colleges and universities to be able to protect and defend themselves,” said Mortensen. She then pointed to the state of Utah, which has had campus carry for 10 years and has seen a drop in crime.

A National Institute for Justice study, in which felons were surveyed in prisons throughout the country, found that guns may deter crime, as a majority of felons agreed with the statement, “A criminal is not going to mess with a victim he knows is armed with a gun.”

However, a Federal Bureau of Investigation study of active shooter incidents from 2000-2013 found that only 1 out of 160 shootings was stopped by a non-law enforcement witness with a gun.