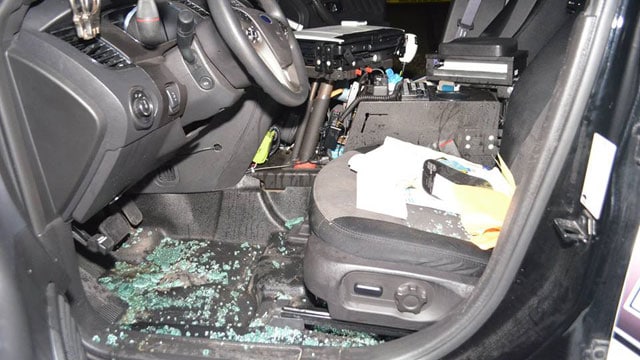 Officers with the Port St. Lucie Police Department arrested a 15-year-old Florida boy Tuesday who is accused of breaking into a police car earlier this year and stealing a number of items, including multiple firearms.

The teen, whose name was not released, is facing charges for armed burglary to a vehicle, grand theft, grand theft of a firearm, felony criminal mischief, unlawful possession of a firearm by a minor, resisting officers without violence, and violation of Probation, according to the Port St. Lucie Police Department.

Authorities launched an investigation after receiving calls of shots fired in a residential area of Port St. Lucie on March 26 around 2 a.m. Responding officers soon located a patrol vehicle from the Fort Pierce Police Department parked in the driveway of a nearby home. The doors of the patrol car were opened and it appeared the vehicle had been targeted for a burglary.

Officers found the front driver’s side window of the patrol car broken and the inside of the vehicle was ransacked. Further investigation revealed that a laptop computer and tint meter had been stolen from the vehicle, along with a gun rack that contained a Bushmaster AR-15 and a Glock handgun. Two rifle magazines and two handgun magazines, along with ammunition were taken as well.

The patrol car was also doused with bleach before the suspect left the scene. The shots reported by nearby residents likely occurred when the teen fired rounds from one of the stolen weapons.

It’s unclear what the teen used to break the glass out of the window, but at some point during the break-in, the suspect cut himself on the broken glass, leaving blood samples on the inside of the door. Authorities then took DNA samples from the blood, which led them to the teen suspect, who was already on probation for an unrelated case.

Officers then went to the teen’s home to make an arrest, but as they arrived, the teen ran out of the back door. After a short chase, the teen was apprehended.

The teen is currently being held at the St. Lucie Regional Juvenile Detention Center.

It’s unclear if the guns and other stolen items were recovered.