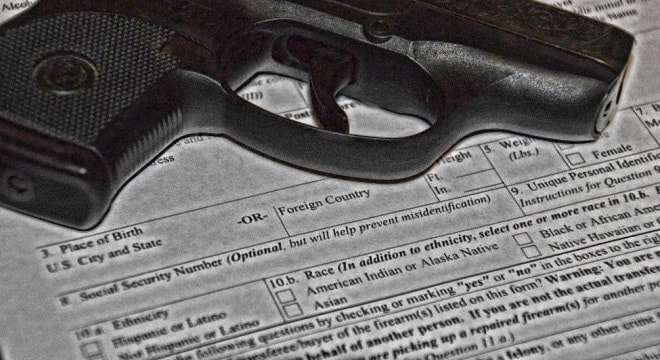 A Senate bill would remove questions from the ATF’s Form 4473 about race or ethnicity (Photo: Chris Eger/Guns.com)

A Republican-heavy Senate proposal would prohibit the federal government from requiring race or ethnicity to be disclosed relating to the purchase of a firearm.

The measure, S.1592, is sponsored by U.S. Sen. Roy Blunt, R-Missouri, with seven co-sponsors including West Virginia Democrat Sen. Joe Manchin and would block what they feel are intrusive and unnecessary questions about a would-be firearm possessor’s demographic background.

The new bill is a simple two-page piece with a single tenet: “The Federal Government may not require any person to disclose the race or ethnicity of the person in connection with the transfer of a firearm to the person.”

Currently failing to adhere to answering these questions on Bureau of Alcohol, Tobacco, Firearms and Explosives firearms purchase record forms, which cannot be skipped, can lead to a non-transfer, and the possibility of fines and imprisonment if a firearm is transferred without completing the form.

Form 4473 is filled out upon any over the counter firearms transaction conducted through one of the ATF’s Federal Firearms License holders. On the form, since April 2012, individuals receiving a firearm have had to select on Question 10a, whether they were Hispanic or Non-Hispanic. Then, on the follow-up Question 10b, they had to check one or more boxes for American Indian or Alaskan Native, Asian, Black or African-American, Native Hawaiian or Other Pacific Islander, or White.

Older versions, adopted in 1998, simply had a blank box on Question 4 for the transferee to write in their choice. In 2005, during the administration of President George W. Bush, the form was updated to ask the same race and ethnicity information as the current form, just in a single-part question format.

The measure has been referred to the Senate Committee on the Judiciary. Similar bills, introduced in the House in the last two sessions, failed to make it out of committee.