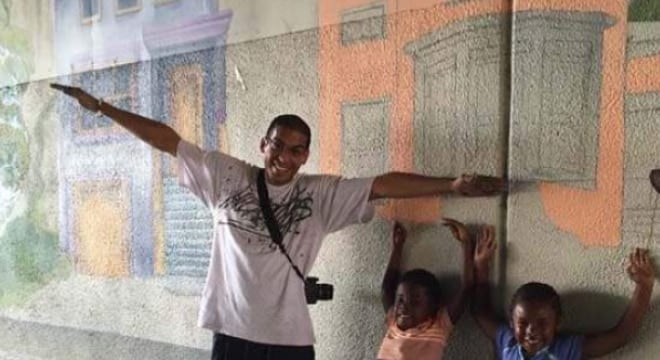 Ramos was shot and killed on Sept. 29, 2015, while working on a mural project under the I580 overpass in Oakland. (Photo: Facebook)

The federal government was named this week in a lawsuit relating to the death of artist Antonio Ramos with a gun stolen from the car of a government agent.

The suit, filed by the family of Ramos, a 27-year-old artist killed with a Glock 26 9mm handgun issued to an ICE Enforcement and Removal Operations officer visiting the city, alleges the officer acted negligently by failing to secure the gun as left in plain view in a rental car parked in a high-crime area known for car break-ins.

The firearm was stolen along with a bag that contained two badges, a pair of handcuffs, three fully loaded magazines, and a baton after the car’s window was broken out on Sept. 13, 2015. Two weeks later, it was used by Marquise Holloway, a gang member and convicted felon, to shoot Ramos while he was painting an anti-violence mural on the I-580 freeway underpass.

“It was foreseeable that leaving a bag in plain sight in a rental vehicle parked on the street in a high auto theft and break-in neighborhood would result in the vehicle and/or bag’s theft, and thereby result in the theft of a firearm and ammunition, in this case specifically,” the filing says. “It was also reasonably foreseeable that a firearm and ammunition once stolen, would then be used in the near future to pursue a criminal course of conduct.”

In their complaint, attorneys note that San Francisco Police Department records reflected a steady increase in guns stolen from vehicles in the city with 57 taken in 2015. This was up from 48 guns in 2014, and 31 in 2013. In the city’s SOMA neighborhood — where the theft occurred — in the six months prior to the Glock being stolen police logged 5,508 auto break-ins.

The suit references a 2010 report from the Department of Homeland Security’s Office of Inspector General that found 179 of the 243 firearms — or 74 percent — lost between 2006 and 2008 were lost due to failure of the agent to properly secure the weapon, and according to the OIG, “all 179 losses may have been prevented had the officers properly safeguarded their firearms.”

“Unfortunately, this is a rampant, agency-wide problem for ICE that has been well-documented for nearly a decade,” said attorney Frank Pitre, who is representing the family. “Despite ICE’s knowledge and awareness of the problem and despite recommendations by other government agencies for corrective action, ICE agents continue to have their unsecured firearms stolen at alarming rates.”

Pitre, who is also representing the parents of Kathryn Steinle, killed as she was walking along San Francisco’s iconic Pier 14 with a gun stolen from the car of another federal agent, says the Ramos family is fundamentally seeking that ICE be held accountable and change their policies to better safeguard their weapons.

The plaintiffs are seeking to have their medical expenses incurred in connection to treating Ramos’ multiple gunshot wounds before he died as well as economic losses due to his death and attorney fees.

His family filed an administrative claim with DHS last June, which was denied earlier this year.