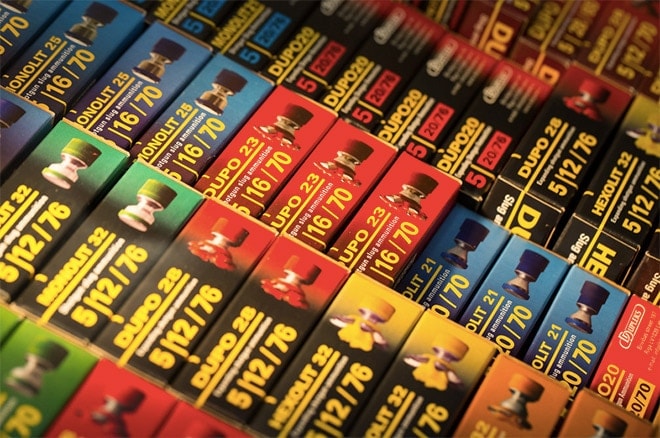 There is little doubt that when it comes to big game hunting, America is the land of the rifle. Even in those areas where the law mandates that deer must be hunted with shotguns, most hunters take to the woods with rifled barrel slug guns in order to maximize useful range and accuracy. As a consequence, American ammunition manufacturers have made quantum leaps in the development of sabot slugs for use in rifled slug guns while slugs for smoothbore guns have remained fairly static. The hollow base foster slug and variations thereof is essentially the only option produced by American manufacturers.

However in many European countries the story is different. In some places, big game hunters are relegated not only to using shotguns, but to only the smoothbore variety. And even where rifles are allowed, the smoothbore shotgun still plays an important role in big game hunting in some European nations. According to Andris Stipnieks, sales manager for the Latvian ammunition manufacturer D Dupleks, during the Soviet occupation of Latvia, smooth bore side-by-side and o/u shotguns, which are generally regarded by American hunters as being strictly small game guns, were the only arms available to big game hunters.  In consequence, double barrel shotguns are still preferred for many hunting situations in Latvia, despite the fact that rifles as well as pump action and semiautomatic shotguns are now available and legal for hunting large game. 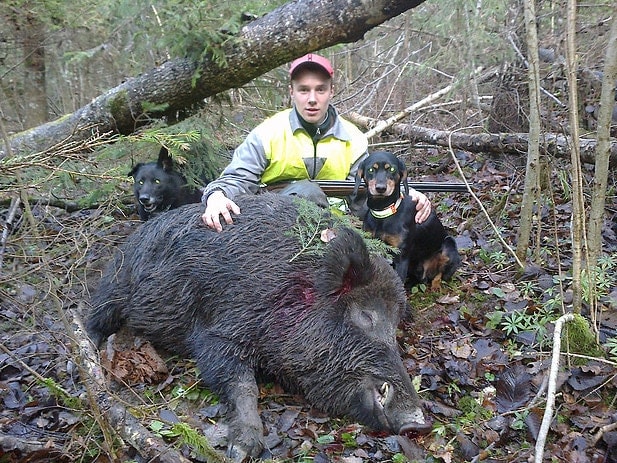 “Often the hunting area has dense vegetation where steel solid slugs perform better than rifles” said Stipnieks. “Another reason [that over/under shotguns are preferred] is that during drive hunts you also have the option to hunt small game. With an over/under, it is possible to quietly open the gun to load buckshot or shot cartridges, or to have one slug and one buckshot cartridge loaded.”

Additionally, Latvian big game hunts often consist of shots taken at running game (driven by “beaters” or what are commonly called “drivers” in the US) at relatively close ranges. The fast handing, easy swinging nature of a double gun is an advantage for this style of hunting.

Necessity always being the mother of invention, ammunition makers in Europe developed smoothbore shotgun slug technology that maximized the performance of the firearms available. One such innovation combined a milled steel projectile with a polyethylene casing and attached wad. The plastic casing in such slugs acts to shield a shotgun barrel from wear and damage and the affixed wad creates a tight gas seal while also acting to stabilize the projectile in flight.

D Dupleks has been manufacturing such slugs in Latvia for 20 years and in 2002 began exporting its products to markets abroad.  In 2009, D Dupleks slugs became available in the United States and the company’s latest showing was at IWA in March 2017. The company offers steel slugs in 12 gauge, 16 gauge, 20 gauge, 28 gauge and .410 bore. 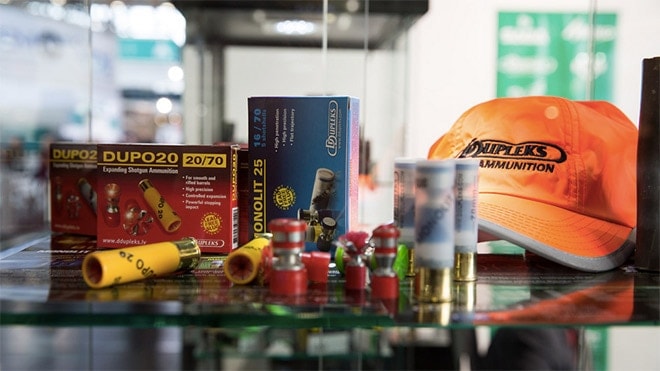 Twelve gauge offerings include the pre-fragmented, expanding Dupo 28, Hexolit 32, and Rosa 32 slugs, as well as solid non-expanding, Monolit 28 and Monolit 32 slugs. The 20 gauge line consists of the non-expanding Monolit 21 while the .410 line consists of the expanding Dupo 7. All slugs are safe for use with chokes from cylinder to full as well as in rifled barrels. Like all other slugs, D Dupleks slugs should not be used in chokes tighter than full, or in guns that have over-bored or back-bored barrels. The maximum recommended range of the 12 gauge offerings is 100 yards.

Being a shotgun slug aficionado, I have been intrigued by D Dupleks products since I first learned of the company’s existence late in 2009. Promotional photographs on the company’s website showed recovered projectiles that looked like little steel saw blades, and promotional videos showed large game animals such a boar and bear dropping dead from one well placed shot. I just had to try them for myself.

I obtained two boxes each of D Dupleks’ Dupo 28 and Hexolit 32 slugs and promptly put them to the test in terms of both accuracy and performance using blocks of 20 percent density gelatin. Accuracy tests were conducted at a range of 50 yards using a Benelli Nova with an 18.5 inch improved cylinder choke barrel equipped with ghost ring sights. Shots were taken from the bench without the aid of sandbags or a gun vice. Only a forend rest was employed. 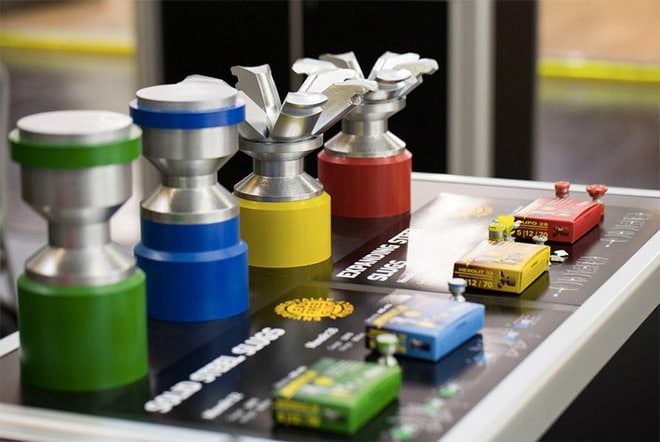 Terminal performance tests consisted of a single shot of each type of ammo fired into a 5x5x13.5 inch block of 20 percent density gelatin backed by plastic bags stuffed with polyester fill material. The polyester fill acted as a bullet arrester when the slugs completely penetrated the block. In order to ensure a well centered hit, shots were fired at a range of 10 feet. While such a setup does not simulate hunting conditions, it was still useful for conducting a comparative test. It should be noted that the close range of the block coupled with its 20 percent density inevitably meant the projectiles were subject to greater stress than they would have been in longer range tests or tests using standard 10 percent gel blocks.

The Dupo 28 is a 1 ounce, pre-fragmented, steel slug that leaves the muzzle at a velocity of 1460 f/s, though the actual velocity is likely slower from an 18.5 inch barrel.

According to literature found on the manufacturer’s website, the Dupo 28 is designed to perform differently depending upon what part of an animal it hits. If the projectile hits an animal in the heart/lung/liver area, the front of the slug is intended to expand, but remain largely intact and create a pneumatic shockwave inside the chest cavity. If the slug impacts the rear half of an animal, which often consists of higher density tissue, the front of the slug is designed to fragment into six splinters, each of which will carve its own path through the internal organs. The intent behind the design is to increase the likelihood that a less than perfect hit on a game animal will still ultimately be lethal. 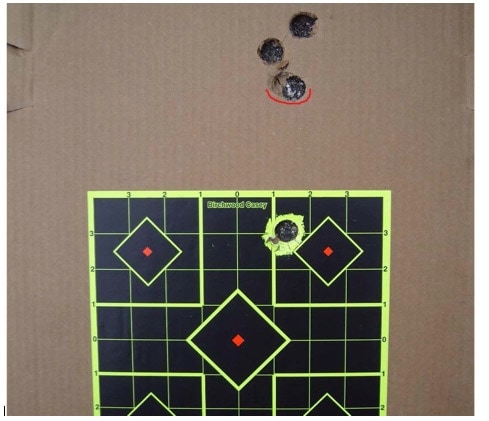 The photo above shows a five shot group of Dupo 28 slugs taken at 50 yards. At first glance, it looks as though only four rounds hit the cardboard. Closer examination of the hole outlined in red, however, shows that two rounds struck almost the same spot. (Photo: Jason Wimbiscus)

The five shot accuracy test I conducted yielded results that I considered more than adequate from a smooth bore gun. Four of the shots clustered into a group that was two and a half inches across at its widest point. One of the five shots, however, was three inches away from the rest of the group. This was more than likely due to shooter error (you’ll never hear me claiming to be a crack shot). The size of the group would likely decrease with the addition of a good optical sight.

The “wound” channel created by the Dupo 28 slug. The entry point of the projectile is at the left of the photo. (Photo: Jason Wimbiscus)

Performance in the gel block was impressive. The first four to five inches of the block was shredded by the round, and the stem of the slug passed through the entire 13. 5 inch length of the block. The projectile was stopped by the first polyester fill pack. The width of the cavity left by the Dupo 28 was 5 inches. If the degree of damage to the front half of the block is any indication, the cavity would likely have been wider had I used a bigger block. In a 5 inch wide block, cavity width cannot exceed 5 inches. 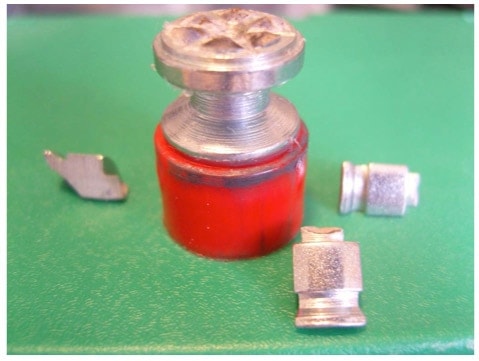 The recovered Dupo 28 slug. The primary fragment had a retained mass of 280 grains and a diameter of .62 inch. Only three petals from the frontal sectioned remained in the gel block. (Photo: Jason Wimbiscus)

Three steel petals from the frontal section of the slug remained in the gel while three others apparently exited. The fragments themselves were sharper than I expected and resembled the teeth found on a chainsaw chain.

The Hexolit 32 is similar in design to the Dupo 28, but weighs 1.125 ounces and has a muzzle velocity of 1410 f/s.  Like the Dupo, the front section of the slug is designed to disintegrate into six steel splinters, each of which cuts a different track through an animal’s organs. 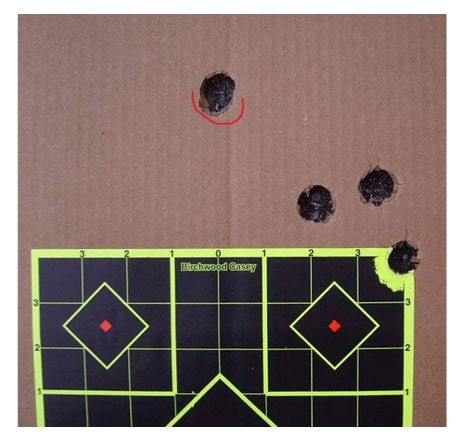 A shot group of Hexolit 32 slugs. Once again, I had two hits in the same spot as is indicated by the elongated hole outlined in red. (Photo: Jason Wimbiscus)

The 50 yard, 5 shot group I fired with the Hexolit slugs was 5 inches in diameter at its widest point. These were the last five rounds I fired during the range session, so shooter fatigue and human error should be factored into the results. Personally, I consider any minute of deer or smaller group from a non-rifled firearm to be satisfactory for its intended purpose. 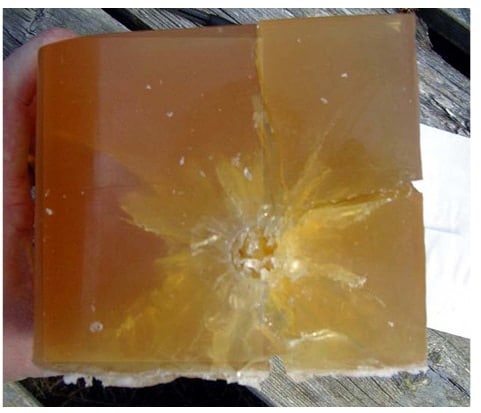 The entry hole in the gel block created by the Hexolit 32. The front half of the block nearly exploded upon impact. (Photo: Jason Wimbiscus)

A cross section of the “wound” channel created by the Hexolit 32. The entry point is at the right of the block. (Photo: Jason Wimbiscus)

The Hexolit 32 proved absolutely devastating to the gel block, pulverizing the front half of it to the point several large chunks of gel fell away when I removed the block from its stand. The primary fragment penetrated the entire 13.5 inch length of the block and was stopped by the first polyester pack. The width of the cavity was once again 5 inches as it could not exceed the 5 inch width of the block. Only one steel splinter from the slug’s front section remained in the gel with the rest apparently exiting on various trajectories. 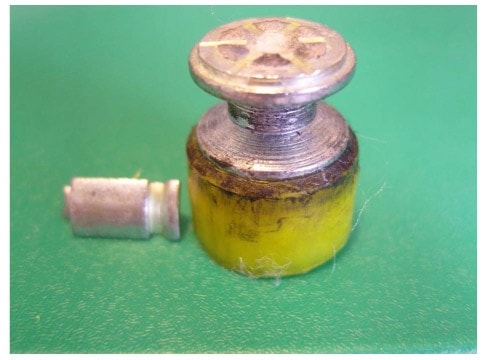 The recovered Hexolit 32. The primary fragment weighed 274 grains and had a diameter of .62 inches. Only one steel splinter from the slug’s front section remained in the gel block. (Photo: Jason Wimbiscus)

I had moderate quantity of gelatin left over after making the blocks for the Dupo 28 and Hexolit 32 slug tests, so I decided to test a Remington Slugger in order to compare the D Dupleks rounds to a more traditional style foster slug. 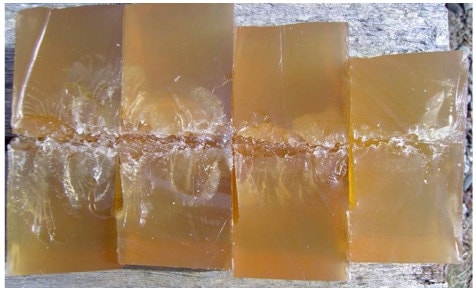 The cross section of the ‘wound” channel created by the Remington Slugger. The entry point is at the left of the block. (Photo: Jason Wimbiscus)

I didn’t have enough material to fashion another 5x5x13.5 inch block, but I was able to stack enough odds and ends together to form a makeshift test block that was 11 inches in length. The Slugger penetrated the block completely and was stopped by the first poly pack. The maximum width of the cavity was 5.75 inches and did not reach the edges of the block. 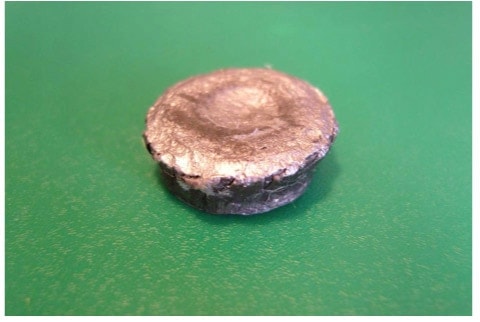 The recovered Slugger. The recovered projectile retained all of it mass and expanded to a diameter of .9 inch. (Photo: Jason Wimbiscus)

In terms of penetration, the D Dupleks projectiles performed similarly to the Slugger in spite of the lead projectile’s greater retained mass. The steel stems of the Dupo and Hexolit slugs continued through the test blocks in spite of having shed their front sections. Likewise, the width of the “wound” channels left by all three slugs were similar, though the channels left by the D Dupleks slugs likely would have been wider had larger gel blocks been used. The fact that the D Dupleks slugs produced what amounted to a burst of steel shrapnel inside the blocks likely gives them greater wounding potential over the Slugger.

Based on the results obtained from the tests I conducted, I see a niche for D Dupleks slugs for brush country hunting where ranges are close and conditions do not often offer a textbook perfect broadside shot. While it should always be the goal of a hunter to place shots directly into the vital organs of their quarry, sometimes things go wrong and peripheral hits occur. The shrapnel burst characteristic of the Dupo 28 and Hexolit 32 slugs could potentially mean the difference between a freezer full of wild pork or a lost animal.