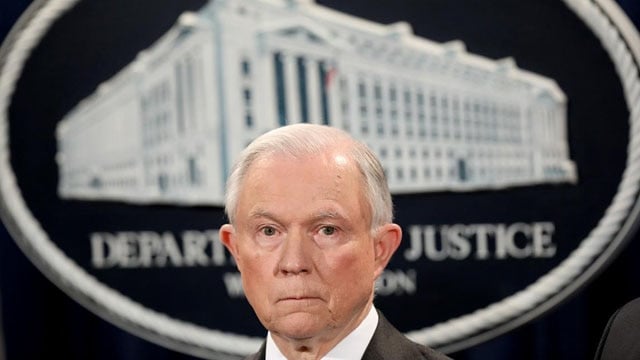 A Justice Department rollback of an Obama-era decision to limit civil asset forfeiture is harmful to poor people, critics say.

Civil forfeiture allows law enforcement to seize money, cars and other property from people — with or without criminal charges filed — as long as the property is suspected of being connected to a crime.

In 2015, then-Attorney General Eric Holder scaled back an element of that: the Equitable Sharing Program. So-called “adoptive forfeiture” allows state and local agencies to sidestep local restrictions on forfeiture by allowing the federal government to “adopt” the seized property, take a cut, and give back the rest.

“State and local agencies have 30 calendar days from the date the property is seized to request a federal adoption,” says a 63-page “Guide to Equitable Sharing” from April 2009.

“I am asking Department attorneys to proceed with an abundance of caution when handling all forfeitures involving vehicles and especially residences,” said Sessions in announcing the renewal of adoptive forfeiture. “If we operate this program in a careful and responsible way, something I believe the American people expect and deserve with a program such as this, the Department’s federal asset forfeiture program will be an effective tool, while at the same time protecting the rights of property owners.”

And Sessions is right to think Americans have expectations about “a program such as this.” In a December 2016 poll by the Cato Institute, 84 percent of the 2,000 people polled opposed forfeiture. And the opposition comes from Democrats and Republicans alike.

“Criminals shouldn’t be able to keep the proceeds of their crime, but innocent Americans shouldn’t lose their right to due process, or their private property rights, in order to make that happen,” said California Rep. Darrell Issa, a conservative Republican.

“Civil-asset forfeiture is unjust and unconstitutional,” tweeted Republican Rep. Justin Amash of Michigan. “It’s a big-government scheme to take people’s property without due process. End it.”

“This is part of Sessions’s agenda to bring back the failed and racist War on Drugs, where this and other ineffective, unjust, and un-American practices were widely used,” said Kanya Bennett, a legislative counsel for the American Civil Liberties Union.

Politics aside, the program has real implications for U.S. citizens. In 2008, a migrant worker was headed back to Mexico when police stopped him and seized $19,000 in cash that he had earned while picking beans in Florida. Officers claimed it was drug money, but Victor Marquez was never charged with a crime. It took him more than a year to get his money back – funds he was bringing to Mexico so he could build a house.

“If they didn’t have the money on their person and it was in a bank account, it wouldn’t be seized. It’s as simple as that,” said Sam Brooke, an attorney at the Southern Poverty Law Center who worked on Marquez’s case. “The law is going to hit them harder than it would a person who is putting their paycheck in a bank account.”

“We should not be permitting the government to just seize any money that they find on someone just because they have a hunch that there might be something criminal,” he said.