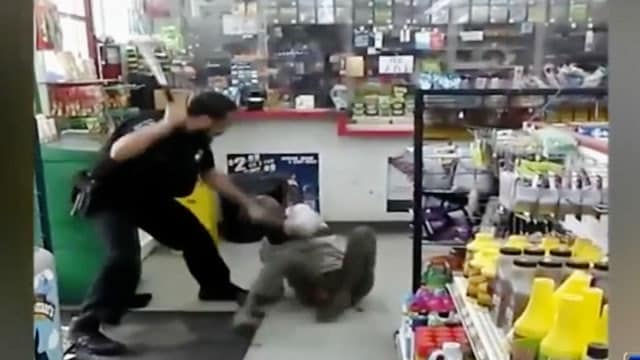 An officer in Georgia who was recorded beating a woman with a baton had more than a dozen previous use of force incidents.

DeKalb County Officer P.J. Larscheid was captured on cell phone video beating Katie McCrary, 38, for over a minute inside a Chevron store in June. He’s on restricted duty for that incident, and according to the Atlanta Journal-Constitution, he’s had 14 other use of force incidents.

In 2011, Larscheid shot and killed a deer with his service weapon, according to his personnel file. He wasn’t reprimanded for that incident because the deer had been injured in a car accident.

He was written up for two other minor incidents — cursing during a theft investigation and failing to take a recovered car off of a stolen car list.

But in 2015, he wasn’t disciplined when he made one suspect’s nose bleed, or when he choked another suspect a few months later. In September 2015, he shot a man who refused to drop a weapon. He was cleared of any wrongdoing in that incident.

In the McCrary incident, she was allegedly asking store patrons for money. In a police report, Larscheid wrote that McCrary told him she was a federal agent and gave him a “random badge number.” When he told her she could get in trouble for impersonating an officer, she tried to grab his badge. That’s when he pulled out his baton. When she refused commands, he started to strike her in the left leg. Then she fell to the ground.

“I continued my baton strikes to her legs and forearms instructing her to stop resisting and to lay down with her hands behind her back,” Larscheid wrote. “One strike inadvertently struck the side of her head as she was moving around.”

McCrary’s husband says Larscheid went too far. “It was a male beating on a woman,” said Anthony McCrary. “And he did not need to use that much force.”

An internal investigation cleared Larscheid, but officials reopened the case in July after the cell phone video surfaced.