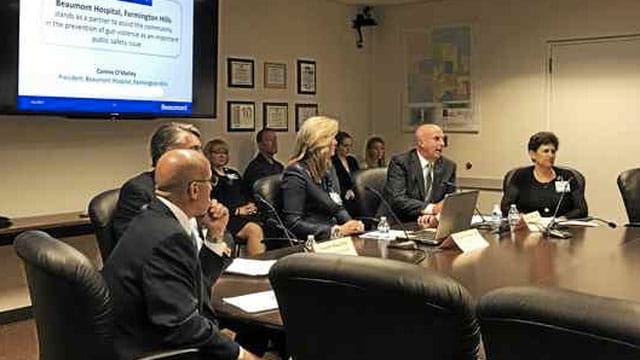 Members of the Oakland County Public Services Committee and others in the medical community come together to discuss solutions to gun violence. (Photo: Mark Cavitt/The Oakland Press)

Members of the medical community in Oakland County, Michigan, came together last week to discuss ways to reduce gun violence, and while everyone could agree that solutions need to be found, not all of those in attendance could agree on the best strategy.

“We have to look at new strategies in combating gun violence,” said Oakland County Public Services Committee Chair Bill Dwyer, who noted that some prior solutions are not working. “I think everything has to start in the home on the part of the parents. Accidental shootings occur because of unsecured firearms. It’s frustrating because lives are being lost.”

The Aug. 1 meeting was the sixth time the Oakland County Public Services Committee came together in an effort to combat gun violence at a local level, according to a press release from the committee.

A number of physicians, nurses, social workers, and others who deal with the immediate effects of gun violence on a daily basis attended the meeting to discuss solutions. Some committee members focused on education, intervention, and safety, while others focused on mental health.

“The biggest thing with this issue is education,” said Dr. Sanford Vieder, medical director of the emergency and trauma center at Beaumont Hospital-Farmington Hills. “A lot of times when we see gun shot victims in the emergency department sometimes it’s too late. We need to educate people that the presence of a gun in the home increases the likelihood of having a incident.”

Likewise, Constance O’Malley, the hospital’s president, said that while she believes more focus needs to go into why these instances are happening, she also supports the county’s Lock-It-Up initiative, which distributes free gun locks and encourages safe storage.

“I really think education is key,” said O’Malley. “Doing it early will help maintain safety in any forum whether it’s in the hospital or out in the community.”

But other committee members spoke of mental health, including the false stigma it often holds.

Dr. Thoedore Ruza, who is a psychiatrist, said the medical community has a duty to ask the right questions and properly evaluate a situation.

“The patient is not going to tell you what’s wrong,” Ruza said. “I don’t have many people that come into my office and say, ‘I’m actively hallucinating and hearing voices that tell me to kill someone.’”

Ruza also noted that, contrary to what many believe, most of those who commit acts of gun violence are not mentally ill.

“About one percent or less of those that commit these crimes have a psychiatric diagnosis,” said Ruza. “Mental health does not mean that you’re at-risk for mass shootings or suicide. What pre-disposes you to a mass shooting are personality disorders like narcissistic personality, paranoid personality and anti-social personality.”

Ruza said that while it’s common to think mass shootings are typically committed by those with a psychiatric diagnosis, “This is absolutely false.”

“We want to contribute in any way we can to reduce the stigma,” Gershenson said.

The committee, which discusses a number of issues related to the county, is due to meet again next week and several more times through the remainder of the year. The meetings are open to the public, and each session allows time for public comment or concerns to be addressed to the committee.