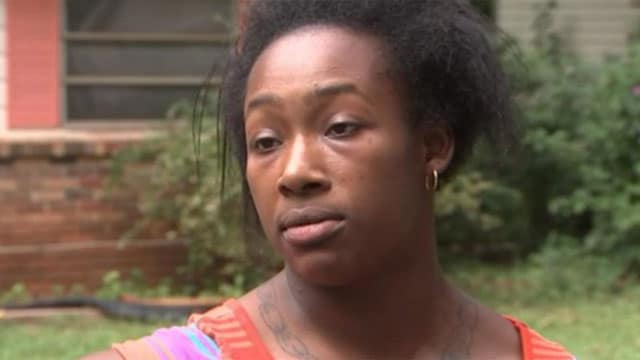 Shaquita Green, who was home alone with her three children when the shooting happened, said she’s sorry someone had to lose his life, “But it was either him or me.” (Photo: WSB-TV)

One man is dead and another behind bars after they barged into a family’s Marietta, Georgia, home early Thursday morning and threatened a mother and her three children.

The Marietta Police Department confirmed in a press release that neither the woman or her children were injured during the incident.

Authorities received a 911 call from Shaquita Green at 2:23 a.m. Green initially said she shot a man who broke into her home, but police later learned after more thorough questioning that Green was tricked into letting the man inside.

Green said she is acquainted with Javarian Mitchell, the suspect who is currently in custody. Mitchell went to Green’s door and after she let him in, Mitchell led the way for the second suspect, Keandre Funches, to enter the home as well.

Green said the men repeatedly asked for her husband, who was not home at the time, and at some point, Funches, who was armed with a handgun, began threatening Green and her three children.

When she saw the opportunity to make a move, Green grabbed her gun and shot Funches, who was later pronounced dead at the scene.

Mitchell fled from the home as gunfire erupted, but was later apprehended by the Cobb County Sherriff’s Office fugitive task force. He now faces multiple felony charges including aggravated assault with a firearm, false imprisonment, cruelty to children in the 3rd degree, and felony murder.

According to reports from the Atlanta Journal-Constitution, Funches was a five-time convicted felon known to engage in gang activity. He had an extensive criminal history, including a domestic violence incident on Jan. 16, 2015, in which he attempted to shoot a police officer, but his gun malfunctioned. Funches was released from prison on March 30 following his most recent stint.

Without elaborating, authorities confirmed the incident at Green’s home was “related to criminal gang activity,” although Green said neither she or her husband were acquainted with Funches. Officer Chuck McPhilamy, with the Marietta Police Department, also noted that they do not believe Green intentionally misled anyone when she initially reported a break-in.

“We believe it was a confusing time,” McPhilamy said.

Green, who is not facing charges at this time, is glad that she and her children were unharmed.

“I thank God it played out the way it did,” Green said. “I hate that someone had to lose their life, but he shouldn’t have come and brought his ass in my house, excuse my language.”