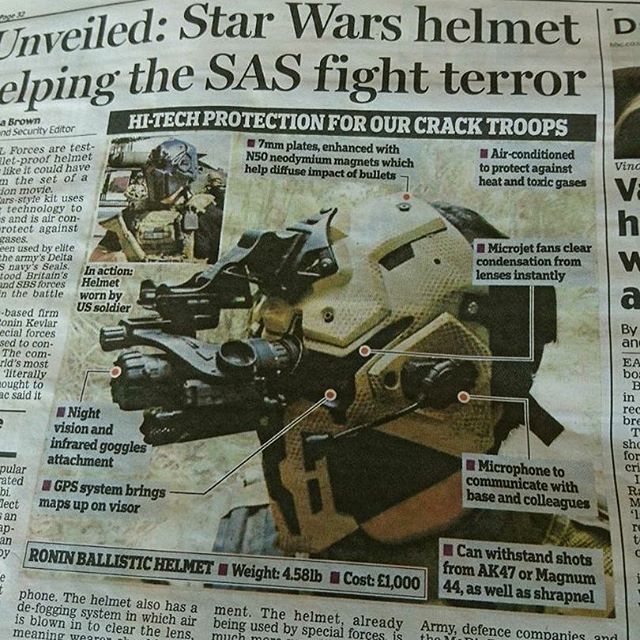 Devtac: “Journalists why you so lazy???” (Photo: Devtac)

A number of British media outlets went crazy over a sweet looking full-face ballistic helmet reportedly used by local commandos — but didn’t do their homework. We did.

Yokohama, Japan’s Devtec started off as an airsoft company but their Ronin ballistic helmet has left plastic BBs behind and is now NIJ Level 3A tested and showing up at international arms shows. Fast forward to last week and the Daily Mirror gushed about how the Ronin “can withstand an AK47 bullet” is “air-conditioned” against heat and “gases,” and is loaded with sensors to detect other troops through “infra-red” settings and has GPS maps including “friend or foe technology.”

The publication reported that, besides being used by the British SAS, it has also been tried by the U.S. Army Delta Force and the Navy’s SEALs, though no representatives of any of the groups are quoted.

All of this was dutifully repeated by the Daily Mail, The Times, The Express and The Sun.

The story even jumped the pond and got picked up by some “tactical” pubs on this side of the English-speaking world, though toned down a bit.

The thing is, no one reached out to Devtac to confirm the story or verify the information, even though the company has a website and heavy social media presence.

“I’m just as surprised as everyone else,” Devtac’s Wesley Shibata told Guns.com via email Sunday.

What the Ronin is: a fan-cooled (not air conditioned) full-face ballistic helmet providing protection up to .44 magnum rounds (NIJ Level 3A) which has been verified in independent lab tests. The panels and lenses are configurable. The helmet covers about 80 percent of the head, weighing in at 4.85-pounds, a lot of which comes from 7mm ballistic panels and N50 Neodymium magnets. It has exterior Picatinny rails and a night vision device mount. All of which is pretty sweet. In fact, Devtac says they are the first people with a commercially available product like this on the market, and it has taken over a decade to perfect.

What it does not have are most of the Star Wars-referenced gear, be it Mandalorian, the Old Republic or Imperial, attested to in the articles by the Mirror et.al. You know, all the friend or foe stuff, infra-red, etc. inside the helmet.

“I guess they misinterpreted it,” said Shibata. “You can attach HUD and other devices that can do those. It’s not built in the helmet because it has to be as simple as possible. Everything else can be attached on it.”

Is the SAS testing the helmet? Shibata said he could neither confirm nor deny.

Are other military units trying it out?

“Yes. That’s about as much as I can say,” said Shibata who went on to explain Devtac is “working on as much as the imagination can get as long as tech is available and will be possibly available.

“We are currently looking for partners and investors to make this a dream come true and help save lives and accomplish successful missions with minimal casualties.”