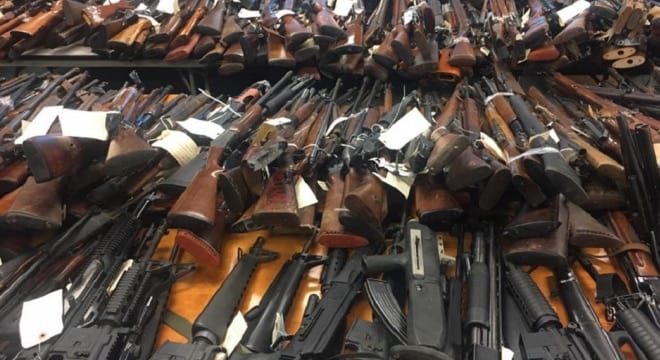 A total of 4,775 guns were collected at New Jersey’s most recent gun buybacks, and a member of the Garden State’s Congressional delegation wants to take the program nationally. (Photo: Facebook)

A New Jersey Democrat has submitted a proposal to the U.S. House that would fund an environmentally friendly grant program to purchase unwanted guns.

Deemed the Safer Neighborhoods Gun Buyback Act, the bill would provide a two-year $360 grant to the U.S. Department of Justice to send out debit cards to gun dealers as well as state and local governments to be used to trade for guns which, in turn, would be destroyed. The bill’s author says the program reduces the number of guns in circulation, thus contributing to public safety.

“Although no one piece of legislation will eliminate all gun violence, this bill will get guns off the streets and keep them out of the hands of people who wish to cause harm,” U.S. Rep. Donald Payne, D-NJ, said in a statement. “If we can get one gun off the street, if we can save one life, then we have to take action.”

Payne’s bill, entered as HR 3613, would use the allocated funds in the pilot program to buy guns for up to 125 percent of their market value. In exchange for the gun — which would be destroyed — the former gun owner would receive a debit card that can be used to buy anything but firearms or ammo. Those violating that stipulation would be liable to repay the funds at twice the value and could pick up as much as two years in prison.

In addition to buying guns, Payne argues the program would work as a sort of economic stimulus package as those who swapped firearms for debit cards would likely spend their new-found funds locally. The bill also sets aside 10 percent of the grant money for recycling the guns into what the lawmaker’s office describes as “environmentally-friendly objects.”

In New Jersey, where Payne’s district is located, the state has increased the scope of their annual buybacks each year, netting a mix of 4,775 firearms in just two days at the most recent event held across the Garden State.

The National Rifle Association slammed the New Jersey initiative as “smoke, mirrors and feel-good puffery” in one of their member publications, citing studies that show the programs have negligible impact in preventing gun violence.

The New Jersey Attorney General’s office last week announced the recently acquired stockpile, with gun owners receiving as much as $200 per firearm, will be recycled and used for construction projects.

Payne says the guns to be bought under his envisioned program are expected to range in price anywhere from $40 to $400 depending on factors such as condition and age.

His bill has 16 co-sponsors, all Democrat, and has been referred to the Republican-controlled House Committee on the Judiciary. A similar measure he introduced last session failed to make it out of committee.