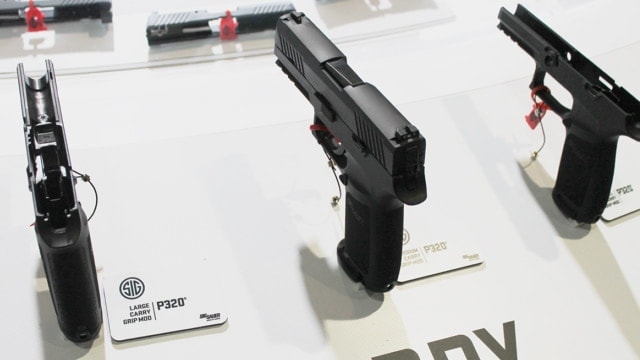 Models of the Sig P320 on display at SHOT Show 2017 in Las Vegas. (Photo: Jacki Billings/Guns.com)

“Say what you want about their design, but I have not heard of stories of Glocks, M&Ps or Ruger Americans having a negligent discharge when dropped inadvertently,” said Maks F.S., a registered investment advisor and contributor at Seeking Alpha, on Monday. “While it might be a short-term opportunity, both Ruger and American Outdoor Brands Company, parent of Smith & Wesson, need to take this opportunity to bring their products to the forefront once again.”

P320’s popularity skyrocketed when the U.S. Army chose Sig Sauer — over Glock and Smith & Wesson, among others — to replace its old service pistol, the Beretta M9, in January.

Maks said the contract provides crucial marketing for Sig — the same way movies and television series boost the profile of certain guns, like the Smith & Wesson Model 29 used by Clint Eastwood in Dirty Harry or the Heckler & Koch P30 and VP9 pistols featured in John Wick.

Except, rumors swirling on the Internet suggest the P320 has unsafe features. Gun writer Andrew Tuohy, on behalf of online retailer Omaha Outdoors, published test results Monday revealing issues with the gun’s drop safety in response to rumors circulating about the issue.

According to a leaked memo published on The Firearm Blog last month, the Dallas Police Department ditched the P320 pistols after Sig identified a defect in the weapon causing it to fire when dropped.

“Until Sig Sauer is able to find a solution to the safety issue, the Sig Sauer P320 is no longer approved … for any use,” the memo said, in part. A Dallas law enforcement spokesman later confirmed the authenticity of the memo to the blog.

The recent revelations regarding the drop issue may not reverse declining sales for Smith & Wesson or Ruger, Maks said, but it could burn out the P320’s 15 minutes of fame far quicker than initially anticipated.

“There is an off chance, however, that this does become a big issue and LEO agencies that have considered the P320 or adopted it will go back and replace them with competitive offerings,” he said.

Sig responded to the conjecture last week, reiterating its “full confidence in the reliability, durability and safety of its striker-fired handgun platform.”

“There have been zero reported drop-related P320 incidents in the U.S. commercial market, with hundreds of thousands of guns delivered to date,” the company said in a press release Friday.

CEO and president Ron Cohen further clarified the company’s commitment to its products, saying “safety and reliability have been and always will be paramount to the Sig Sauer brand.”

In the New Jersey case, the pistols regularly experienced “failure to extract” malfunctions — essentially becoming jammed after firing off one round. The gun maker shipped off several fixes to the pistols over the course of 16 months, but never corrected the problem. The state later rescinded its deal and awarded a new contract to Glock last year.

Court documents allege state police suffered damages including $1.7 million for the guns, $856,680 for accompanying holsters and reimbursement of unspecified costs for testing and evaluating the guns.