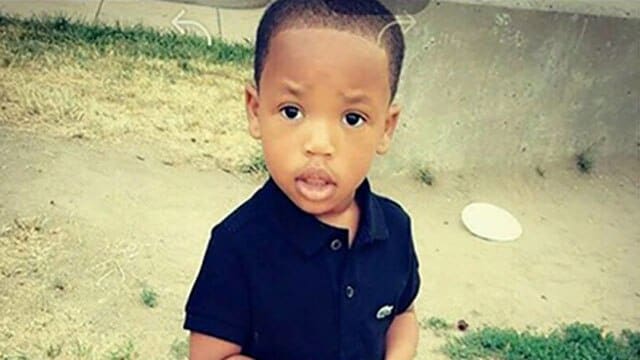 Carter Hill, 4, was struck in the head when two men fired more than 10 rounds into his mother’s car. (Photo: ABC 5)

A 4-year-old boy remains hospitalized after he was shot in the head late Sunday night in what authorities are describing as a possible road rage incident.

Cleveland Police Sgt. Jennifer Ciaccia said the suspects, who remain at large, should be considered “armed and dangerous.”

The incident unfolded just before midnight as Cecilia Hill was driving with her 4-year-old son, Carter, and her 7-year-old daughter, local media reported.

Hill came upon a white Pontiac with tinted windows that was partially blocking a residential road. She said she could see two black men standing beside the vehicle, and waited several minutes before finally honking her horn. Hill was able to make her way past the car and continued driving, according to ABC 5.

However, Hill said the men apparently got into the Pontiac and followed her onto the interstate. They caught up to her near an area known as Dead Man’s Curve and opened fire into her vehicle.

Ciaccia said more than 10 rounds were fired, with multiple rounds hitting Hill’s vehicle. Carter, who was sitting in the back seat, was struck in the head.

Hill then pulled off of the interstate and called for help. Carter was rushed to a local children’s hospital where he underwent surgery to have the bullet removed. According to reports, the boy was breathing and conscious when EMS arrived. Initial reports indicate the bullet did not penetrate the boy’s brain.

Hill, who expressed gratitude to first responders and hospital staff caring for her son, was uninjured. Her daughter suffered minor injuries from flying shards of broken glass but is expected to be okay.

Authorities are asking for the public’s help in identifying and locating the suspects. According to local media, police received reports of a vehicle matching the Pontiac’s description, but despite a rapid response, officers were unable to locate the vehicle.

Hill said she is not acquainted with the suspects and had never seen them before the incident. She said she’s unsure why they pursued and shot at her, but believes they were likely angered when she honked her horn at them.

Ciaccia said the investigation is ongoing.