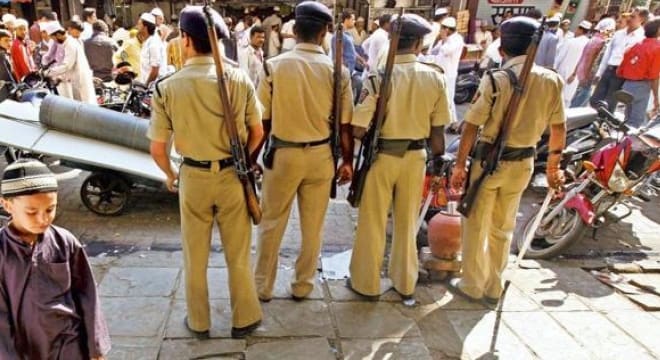 In India, it is not uncommon to come across a police officer still shouldering a throwback to the WWII British Army. (Photo: Janta Ka Reporter)

Although classified as “obsolete” over 20 years ago and slated for replacement, local reports in India show that in some parts of the country about half of the police are armed with Enfield SMLE Mk III/III* pattern .303-caliber rifles.

In Uttar Pradesh, the most populous state in India with over 200 million residents, some 58,853 of the British .303-caliber rifles are still in the police arsenals and are getting a lot of use despite the fact they were supposed to be swapped out for more modern weapons.

“Point-303 bore rifles had been declared obsolete more than 20 years ago in February 1995 but about 48 per cent of the police force in the state are still using it,” says a 2016 government audit recently obtained by Indian media after it was presented to the UP Assembly.

One reason the guns may have been kept in service is a separate report that some ammunition types such as 9mm for MP5s submachine guns and 12-gauge shotgun rounds were not available, while supplies of .303 ammo were.

The force still uses Ishapore 2A/2A1 rifles, Enfield variants made during the 1960s and 70s chambered in 7.62x51mm NATO– which are considered modern– as well as Indian FN FAL variants (the 1A), AK47s, and the domestically produced INSAS 5.56mm rifle. Besides domestic law enforcement, Uttar Pradesh have serious counter-terrorism concerns, suffering from a wave of terror attacks in 2007 blamed on Islamic radicals.

The UP government has set a goal to replace the remaining .303s in the next five years, The Hindu reported.