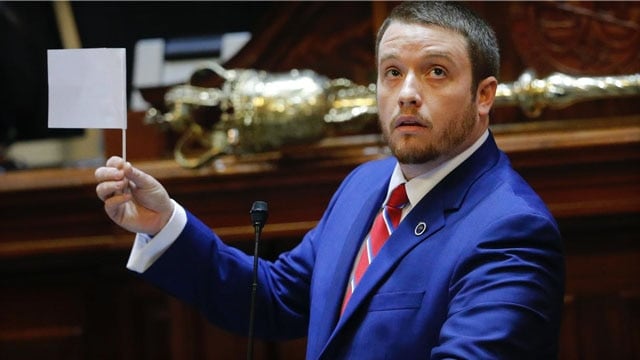 A former state lawmaker in South Carolina was sentenced to probation Monday after pleading guilty to first-degree domestic violence.

Chris Corley, 36, punched his wife with a closed fist, bit her on the nose, pointed a gun at her, and threatened to kill her and himself in December in front of their three children, according to court records. He was sentenced to six years in prison, which was suspended to five years probation, according to the Aiken Standard.

Several of Corley’s family members spoke before Second Judicial Circuit Judge Doyet A. Early III on Monday prior to sentencing. Corley’s wife, Heather, said Monday was the couple’s 13th wedding anniversary, and pleaded for leniency for her husband.

“Let me start by saying none of this was my intention,” she said. “I only wanted my husband to get the help he needed. We sought medical help for his mental state for one year. As the year progressed, it became increasingly worse. He has since been diagnosed with bipolar disorder, and the medications he was taking, which were prescribed, were increasing and prolonging manic stages which caused his behavior to become erratic.”

She said Corley pleaded guilty because she felt the family was being coerced by the attorney general’s office. She said a uniformed officer came to subpoena their 8-year-old to testify against her father in the event of a trial.

“We don’t want our little girl to have to go through that awful experience,” she said. “I’m just pleading with you – I’m begging you not to send (Chris) to jail.”

The judge said he couldn’t accept a guilty plea that was forced, and asked Corley why he was pleading guilty.

“Because I am guilty, your honor,” Corley said.

Several of his friends and family members also pleaded for leniency Monday, including his pastor and mother-in-law. Corley himself was the last person to address Judge Early.

“Your Honor, there are so many people I need to apologize to – all the residents in the 84 House District who trusted me. My parents who suffered through this with me. My in-laws who haven’t treated me like anything but one of their own. But most importantly, Your Honor, I let down my wife and my children – and that’s something I will have to deal with for the rest of my life.”

Corley resigned from his seat in the South Carolina State House in January, just a few months after he was re-elected to a second term. He made a name for himself by fighting to keep the Confederate flag flying on Statehouse grounds, something that ended in July 2015 after nine parishioners were killed in a massacre at a Charleston church.

In a Christmas card that year, Corley told Republican colleagues to “ask for forgiveness of all your sins such as betrayal.”

“May your Christmas be filled with memories of a happier time when South Carolina’s leaders possessed morals, convictions and the principles to stand for what is right,” read the card, which featured the Confederate flag, and which he called a joke.

During session last year, Corley voted for a bill that strengthened punishments for domestic violence. He had faced up to 15 years in prison.