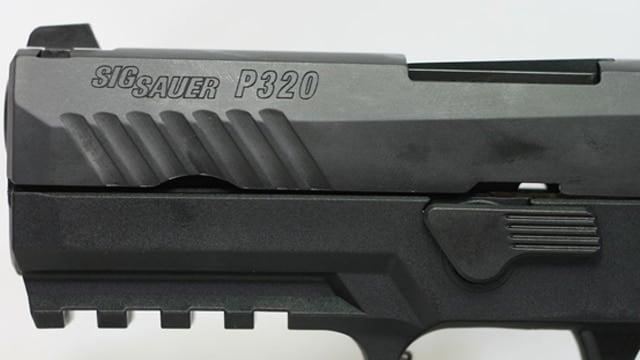 The business end of the Sig P320 pistol. (Photo: GunBroker)

Amid increased scrutiny, Sig Sauer was named in a $7 million personal injury lawsuit by a Connecticut police officer who was injured when his holstered P320 pistol discharged when it hit the ground.

Vicent Sheperis, a 34-year-old police officer in Stamford, Connecticut, filed the case against the New Hampshire gun maker in a New Haven federal court last week. The lawsuit alleges his injuries were the result of a defective safety mechanism in the P320 design, which has also been a growing topic among firearm enthusiasts.

According to the complaint, Sheperis, a member of Stamford police Special Response Team, was injured in January when his department-issued P320 pistol fell as he loaded equipment into a vehicle. The pistol discharged when it hit the ground and the bullet struck him in the leg and knee.

“The weapon’s internal and external safeties all failed to prevent it from discharging and shooting Officer Sheperis,” the lawsuit says, adding the trigger was “incapable of being touched or of any movement” because the gun was inside a holster.

“At no time before, during or after the incident did Officer Sheperis place his finger on the P320’s trigger or touch the holstered firearm in any manner,” the lawsuit says and cites a report filed about the incident that reiterates those details. Stamford police then “shelved” all the P320 pistols issued to the SRT operators, the lawsuit says.

As news of the case came to light, issues involving the Sig P320 had been developing. The New Hampshire gun maker has been in the hot seat since last week the Dallas Police Department suspended the P320’s use, citing concerns about the gun’s drop safety in a memo to its officers. Sig responded to the memo, saying there had been “zero reported drop-related P320 incidents in the U.S. commercial market.”

To explore comments by the Dallas police, a gun blogger published test results in an impactful video Monday showing the gun discharging when hitting the ground at a certain angle. Then, on Tuesday, Sig issued a statement, saying it would offer later this month a “voluntary upgrade” for consumers.

The lawsuit was filed after the Dallas police issued the memo, which was referenced in the complaint along with 11 other examples, but before the company issued the voluntary upgrade.

Although Sig re-assured the public that the P320 design meets industry standards regarding its drop safety, Sheperis’s attorney, Jeffrey Bagnell, thinks the upgrade is telling. “The suit has been validated already,” he said.

“They issued a voluntary upgrade, but there’s another word for that,” Bagnell said, adding that having Sig recall and fix the alleged defect is one of the demands listed in the complaint.

In May, Sig was named in a lawsuit by the state of New Jersey, which alleged the company sold its state police malfunctioning pistols. The guns in question, however, were the P229 rather than the P320. Sig has denied those allegations.

Sig won bragging rights in January when the U.S. Army selected the P320 as its new official sidearm and awarded the company a $580 million contract. To win the much coveted prize, the gun maker beat out major competitors like Glock, Smith & Wesson and Beretta, which held the title for more than 25 years.

According to the case docket, Sheperis’s attorney has filed a number of motions to set a schedule for the discovery phase. Sig has 21 days to respond to the initial complaint and until Nov. 4 to file a motion to dismiss.