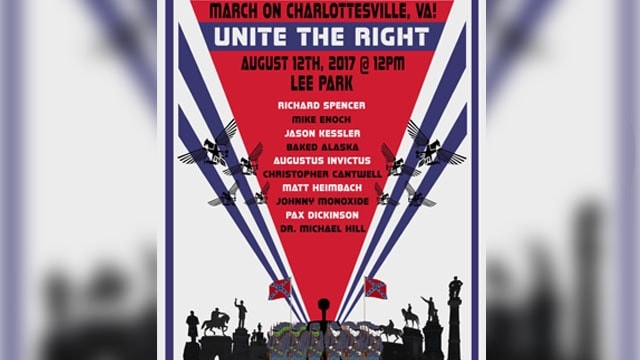 A flyer for the Aug. 12 event in Virginia. (Photo: Twitter)

A planned white nationalist rally in Virginia this weekend is becoming a hotbed of controversy.

The Unite the Right Free Speech Rally was that supposed to happen at Emancipation Park, formerly Robert E. Lee Park, on Saturday in Charlottesville, but on Monday, the city announced the rally would have to be held at a different park a mile away — a move being challenged by the ACLU, which is citing First Amendment concerns.

The location of the event is no accident. “Unite the Right” organizers sought to hold it there because of the symbolic significance of a statue of Confederate General Robert E. Lee. The city council has voted to remove the statue, but a court injunction prevented that from happening, at least until a hearing in November.

This isn’t the first time the statue has been at the center of controversy. In July, a few dozen members of the Ku Klux Klan held a torchlit demonstration at the statue, protesting its removal. About 1,000 counter-protestors showed up, and Charlottesville law enforcement spent more than $30,000 keeping the two groups separated.

On the Unite the Right Facebook event page, organizers say Saturday’s rally “seeks to unify the right-wing against a totalitarian Communist crackdown, to speak out against displacement level immigration policies in the United States and Europe and to affirm the right of Southerners and white people to organize for their interests just like any other group is able to do, free of persecution.”

And the American Civil Liberties Union in Virginia agrees: the group should be free of persecution. On Tuesday, the ACLU sent a letter to the Charlottesville City Council asking them to reverse the location change decision.

“The City must act in accordance with the law, even if doing so is distasteful to members of the community who disagree with the views espoused by the “Unite the Right” organizers,” the letter said. “At the very least, the City must explain in more than just generalities its reasons for concluding that the demonstration cannot safely be held in Emancipation Park.”

“Otherwise, it appears that the City’s revocation of the permit is based only upon public opposition to the message of the demonstration, which would constitute a violation of the organizers’ fundamental First Amendment rights.”

The location of the rally isn’t the only problem for event organizers. On Monday, room rental service Airbnb announced it would be cancelling rentals for participants of the rally.

“When through our background check processes or from input of our community we identify and determine that there are those who would be pursuing behavior on the platform that would be antithetical to the Airbnb Community Commitment, we seek to take appropriate action including, as in this case, removing them from the platform,” the company said in a statement to NBC29.

“This is outrageous and should be grounds for a lawsuit,” event organizer Jason Kessler told the Washington Post.

“It’s the racial targeting of white people for their ethnic advocacy,” he said, adding that the rally “is opposed to the historical and demographic displacement of white people. Would Airbnb cancel the service of black nationalists or Black Lives Matter activists for their social media activity? Of course not!”

Kessler says he isn’t a white supremacist or a white nationalist, according to a report from the Southern Poverty Law Center, which monitors ‘hate groups’ and has called Saturday’s rally “the largest hate-gathering in decades.” Still, many of the speakers at the event identify as white nationalists, including Richard Spencer, the widely regarded founder of the Alt-Right.

He announced he’s adding Ayla Stewart to the lineup, a Mormon “mommy blogger” who earlier this year held a “white baby challenge” on Twitter.

Despite all of this, Kessler says permit or no permit, he’s holding the rally at the statue.

“I have notified the police of our intention to carry out our First Amendment protected demonstration at the Lee Statue,” he said, “and we are working with them to do this in as safe a manner as possible given the unwise and unlawful decision of city council to revoke our permit.”