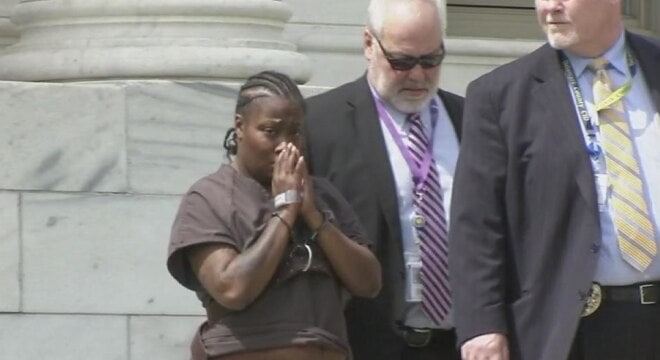 Vikki Towns-Perez is set to serve five to 10 years in the state penitentiary after purchasing several handguns for her now-murdered nephew. (Photo: WPVI)

A Pennsylvania woman will serve up to a decade in prison after pleading guilty this week to buying firearms for her nephew who was barred from gun ownership.

Vikki Towns-Perez, 36, of Chester, was sentenced to five to 10 years by a Delaware County Common Pleas Court judge on Tuesday, as reported by the Delaware County Daily Times. Her negotiated plea included six consolidated third-degree felony counts of selling a firearm to an ineligible transferee and one count of the same charge as a second-degree felony.

According to Delaware County District Attorney Jack Whelan’s office, Towns-Perez bought at least nine handguns between February 2012 and May 2013, to include several Kel-Tec 9mm semi-autos. Although she purchased them under her own name, the guns were for her nephew, who she thought to have been convicted of numerous crimes. In each case, Towns-Perez pocketed $150-200.

Five of the handguns went on to be recovered by authorities after being used in felonies. One was tied to a drug-related homicide.

“We know that the vast majority of the illegal guns on the streets used for violence and crime are a result of straw purchases,” Whelan said. “In the case of Vikki Towns-Perez, she purchased these guns without any regard for the law, knowingly giving them to an individual she believed to be a criminal.”

Towns-Perez, an unemployed mother of four and one-time nurse’s assistant, was sentenced under the state’s Brad Fox Law which mandates a mandatory five-year minimum prison term.

Fox, a Plymouth Township police officer and Marine, was shot in the head by a felon who had illegally purchased a gun through a third party. Following his death, lawmakers in the state passed a new law to provide tougher penalties for those who lie during otherwise legal gun transactions to obtain a firearm for someone who is prohibited from possessing one. The law was first used in 2014.

Towns-Perez’s nephew, 23-year-old Ka’Ron Ingram, was shot and killed in an unsolved homicide in 2015.