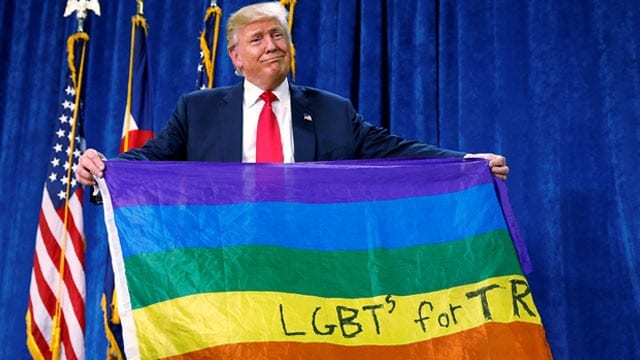 In Doe v. Trump, the National Center for Lesbian Rights and GLBTQ Legal Advocates & Defenders are arguing on behalf of five transgender service members in the U.S. District Court for the District of Columbia.

The suit comes after a series of tweets late last month from the president, in which he claimed to have consulted with “Generals and military experts,” and ultimately decided that the “United States Government will not accept or allow transgender individuals to serve in any capacity.” The tweets caught some senior members of the military off guard, and the Pentagon has yet to change any of its policies.

Mr. Trump’s announcement came little more than a year after the Pentagon, under former President Obama, lifted a ban on transgender service members. While exact numbers are unknown, the Pentagon estimated in 2016 that there were between 2,500 and 7,000 transgender Americans serving out of 1.3 million active duty service members in the U.S. Armed Forces.

Plaintiffs in the suit say the president’s announcement is causing a lot of uncertainty.

“Last year, the Department of Defense announced that transgender people could serve openly,” said one plaintiff, according to a news release from GLAD. “I was very relieved and came out as transgender to my commanding officers, who were supportive. My experience has been positive and I am prouder than ever to continue to serve. I am married and have three children, and the military has been my life. But now, I’m worried about my family’s future.”

Plaintiffs in the case include service members in the Air Force, the Coast Guard, and the Army. They’ve served in Iraq and Afghanistan, and make up a combined 60 years of service.

“These plaintiffs put their lives on the line every day for all of us,” said Jennifer Levi, director of GLAD’s Transgender Rights Project. “We can’t afford to lose a single one of them.”

Last week, 56 retired General and Flag Officers slammed the president’s announcement, saying the ban “would cause significant disruptions, deprive the military of mission-critical talent, and compromise the integrity of transgender troops who would be forced to live a lie, as well as non-transgender peers who would be forced to choose between reporting their comrades or disobeying policy.”

A report released Wednesday from the independent think tank the Palm Center found that full implementation of the president’s ban “would cost $960 million in pursuit of saving $8.4 million per year.” Part of the president’s reasoning for the ban was “tremendous medical costs.” That $8.4 million is the estimated cost of transition-related medical care that the military would have to pay annually for transgender members.

Lawyers for NCLR and GLAD assert that the president’s ban violates the equal protection and due process guarantees of the Constitution.

“We argue that Trump’s policy was enacted to discriminate, not to serve any legitimate purpose,” says an overview of the suit on GLAD’s website. “It directly contradicts the military’s own careful, recent conclusion — reached after a comprehensive review process — that there is no reason to ban transgender soldiers from serving.”