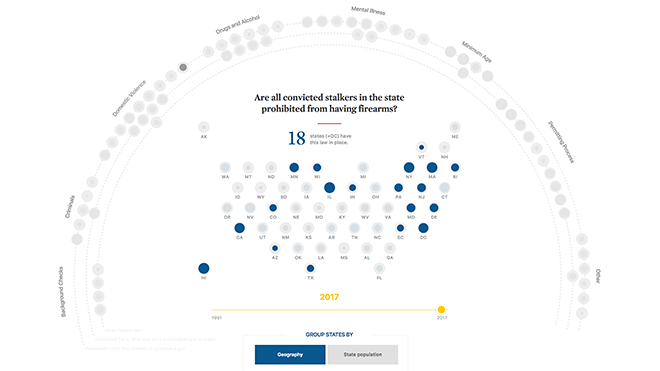 Everytown for Gun Safety this week launched an interactive online tool comparing gun laws between states over the past 25 years.

The gun control group says Gun Law Navigator users can use the tool to see how gun laws have changed in states across the country and claim it’s the “largest historical database of current American gun laws.”

“Two years in the making, the Gun Law Navigator … covers hundreds of state laws related to gun background checks, who can possess and who can carry guns, concealed carry permitting systems, and restrictions on access to guns by domestic abusers,” Everytown said in a press release announcing the web application’s launch.

Everytown noted several trends that become apparent upon inspection of the nation’s gun laws since 1991, including those dealing with domestic abuse and background checks.

Some six states have also prohibited violent misdemeanor offenders from gun possession and nine have blocked concealed carry for the group.

Everytown made its way into the gun debate in 2014, when it launched and pulled several other gun control groups — Moms Demand Action for Gun Sense in America and Mayors Against Illegal Guns — under its banner with financial support from former New York Mayor Michael Bloomberg.

The group set its sights on background checks, supporting a federal bill that would close loopholes in states with weaker gun control laws. That measured failed, so Everytown started focusing on individual states with an eye on Internet and gun show sales.

Everytown says progress is being made and claims that since 1991, eight states have passed new background check laws and only two have repealed them.

“With the Gun Law Navigator, people can now draw apples-to-apples comparisons between states on hundreds of gun laws, for each year in a nearly three-decade data set. This makes possible exciting new ways of measuring the impact of public safety laws, and we look forward to continuing to learn from this data and from the research it will make possible.”