Marines want information on buying up to 194,000 suppressors 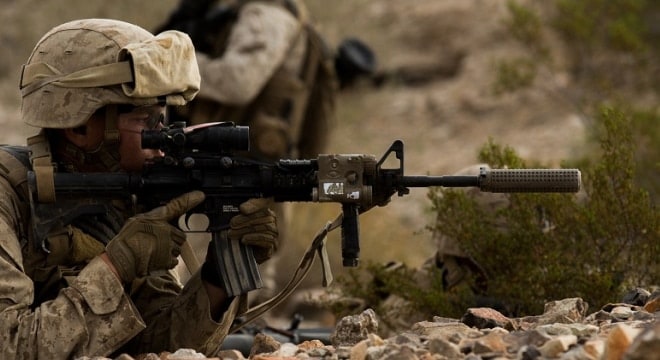 Marines of the 1st Battalion, 2nd Marine Regiment have been testing suppressors since last November, now the Marines are asking the industry about buying in bulk (Photo: 2d MARDIV Combat Camera)

The Marine Corps has posted a Request for Information on commercially available suppressors that can work across all of their 5.56mm platforms.

The RFI, posted Aug. 3, is feeling out the industry for current availability of a detachable suppressor capable of reducing the sound of a 5.56mm round to 139dB. To be used by the M4 and M4A1 carbines, as well as the M27 Infantry Automatic Rifle — a select-fire HK416 — the Corps is interesting in buying in bulk.

Among the requirements for the devices and their muzzle device is an upper weight limit of 18-ounces and be capable of full-auto or otherwise sustained fire rates of “6 rounds per minute for 16 minutes, 40 seconds.”

The suppressor should be able to operate across the spectrum of current 5.56mm rounds including ball, match, tracer, barrier, and EPR ammo while remaining clear of M203 grenade launchers that may be mounted on the rifle. The can should not adversely affect accuracy but should be capable of accepting both field-applied camouflage (spray paint) and thermal sleeves.

In a twist for many potential manufacturers, the Marines also want a blank firing adapter version of the suppressor of the same size and weight as the original capable of catching a live round.

The Marines have increasingly been experimenting with the use of suppressors for small arms in recent months. While the devices have long been utilized on a small scale and by special units, last year an entire infantry battalion of the 2nd Marine Division started using them in a trial program on everything from service rifles to .50-caliber machine guns. This has been backed up by a series of videos by the Division’s Gunner, CW5 Christian P. Wade, showing off suppressor use and dispelling myths.

Besides obvious tactical advantages, Adam Mehlenbacher, an audiologist who heads up the American Academy of Audiology’s Government Relations committee, told Guns.com recently that increased use of suppressors by the military could also alleviate hearing loss and audiological complications for many service members and their families.

“Hearing loss and tinnitus are the most common service related disabilities,” said Mehlenbacher, an Army veteran who had deployed to Bosnia and Iraq. “They can have an enormous negative impact on communication ability and quality of life.”