Photojournalist captures impact of gun violence with one powerful image 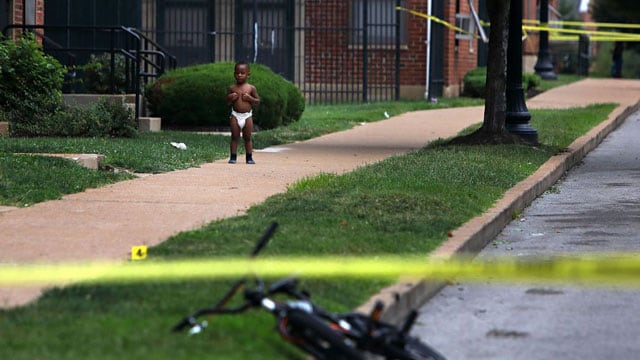 A single image captured Monday afternoon by a photojournalist at a crime scene in St. Louis depicts a troubling reminder that sometimes the smallest children are the biggest victims of violence.

“You’re looking for moments that can tell a larger story,” photographer David Carson told Fox 2 in an interview Tuesday.

That moment came when Carson, who works as a photojournalist for the St. Louis Post-Dispatch, was at the scene of the fatal shooting of a 22-year-old man, the third such shooting at the Peabody Housing Complex in less than a month. In the midst of crime scene tape and evidence markers stood a toddler wearing only a diaper and a pair of socks.

The photo was published on the Post-Dispatch’s website, but Carson also shared it via Twitter, noting to followers that the image should be bothersome.

“I want people to be upset when they see this photo, because it makes me upset,” Carson added. “He lives in a world where sirens and crime scenes and police collecting casings outside of his front door is a regular event,” Carson said of the toddler, who stood outside as officers worked the scene.

Carson said the photo reminded him of a story about traumatic toxic stress previously written by his colleagues Laurie Skrivan and Nancy Cambria.

“You think about adults, and it being rough on adults, you can only imagine the impact that this has on children.” Carson said. “How can a two-year-old process that a man, you know, was shot and killed outside of his front steps?”

The suspect in Monday’s homicide was apprehended later that day after he returned to the scene and surrendered to authorities without incident. St. Louis Police Lt. Col. Gerald Leyshock called it “pretty unusual” and said the shooting was the result of an “earlier dispute” between the two.

And Carson said even though the city is no-doubt plagued by gun violence, it’s not all bad all the time.

“The story hasn’t stopped,” he added. “The story continues to evolve.”