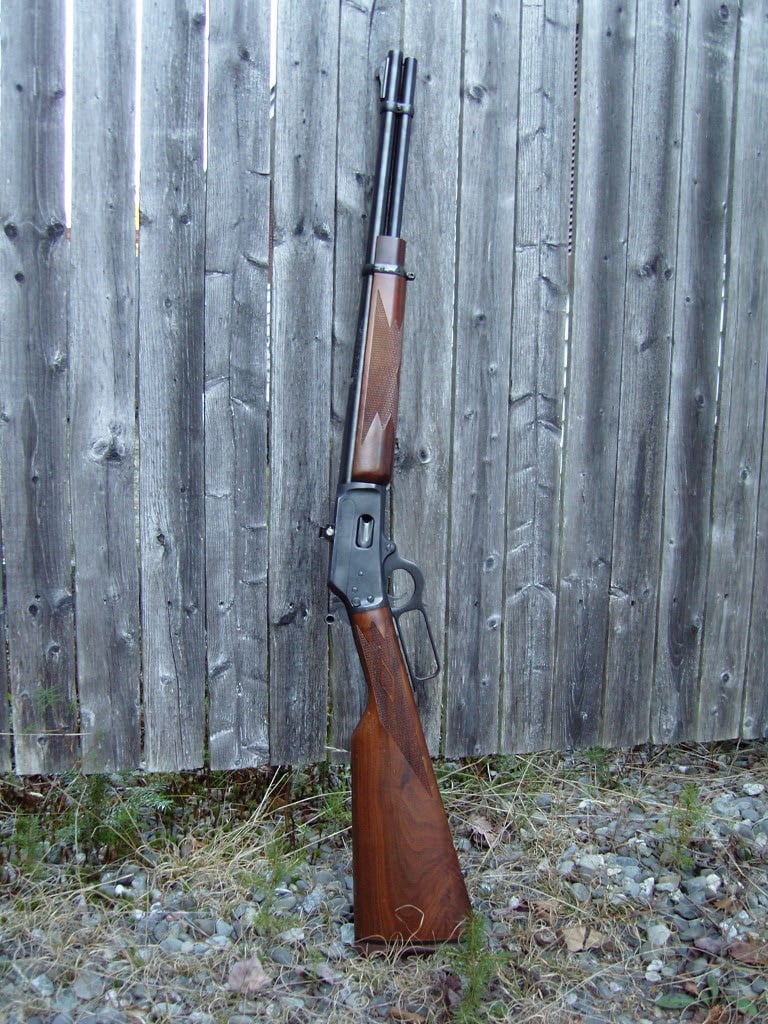 Since its invention in the 1930s, the .357 Magnum has been used successfully to game from varmints all the way up to elk and moose.  While the .357 Magnum has long since surrendered the title of “world’s most powerful handgun round” to the likes of the .44 Remington Magnum, the .454 Casull, and the .500 S&W Magnum, among others, it is still a potent and versatile cartridge.  And, as you’ll see, this statement holds especially true when the round is chambered in a short, light, fast handling carbine such as the Marlin 1894C.

In terms of ballistics ,the .357 becomes a whole new animal when chambered in a long gun.  By loading well constructed bullets over potent charges of such relatively slow burning powders as Hodgdon Lil’Gun, Hodgdon H-110, and Allaint Blue Dot, the careful handloader can craft rounds that are more than adequate for deer sized game inside 100 yards.

In general, the muzzle velocity of a .357 magnum bullet will be 250 to 300 f/s greater than the same round fired from a handgun with a 4 inch or 6 inch barrel.  This velocity increase makes bullet selection important.  A bullet designed to expand in a controlled manner at handgun velocities may explosively fragment at carbine velocities.  Such explosive performance is perfect for varmints, but may not result in the penetration necessary to down larger game.  Solidly constructed bullets in the 158 to 200 grain weight range are generally the best choices for big game.

The following four loads were tested for terminal performance in ballistic wax and were found to offer spectacular results.  While not formally tested for accuracy, all loads were found to be capable of grouping 5 shots within 5 inches offhand at 50 yards from my 18.5-inch barrel Marlin 1894C topped with a Williams peep sight.  All primers used in the following loads were CCI 550 small pistol magnum; all cases were manufactured by Remington.  Terminal performance was tested at a range of 50 yards in Bullet Test Tube media, which is essentially a dense, soft wax that generally yields a penetration decrease of 50 percent when compared to standard 10 percent ordinance gel.  Estimated 50-yard impact velocities were determined using ballistic software. 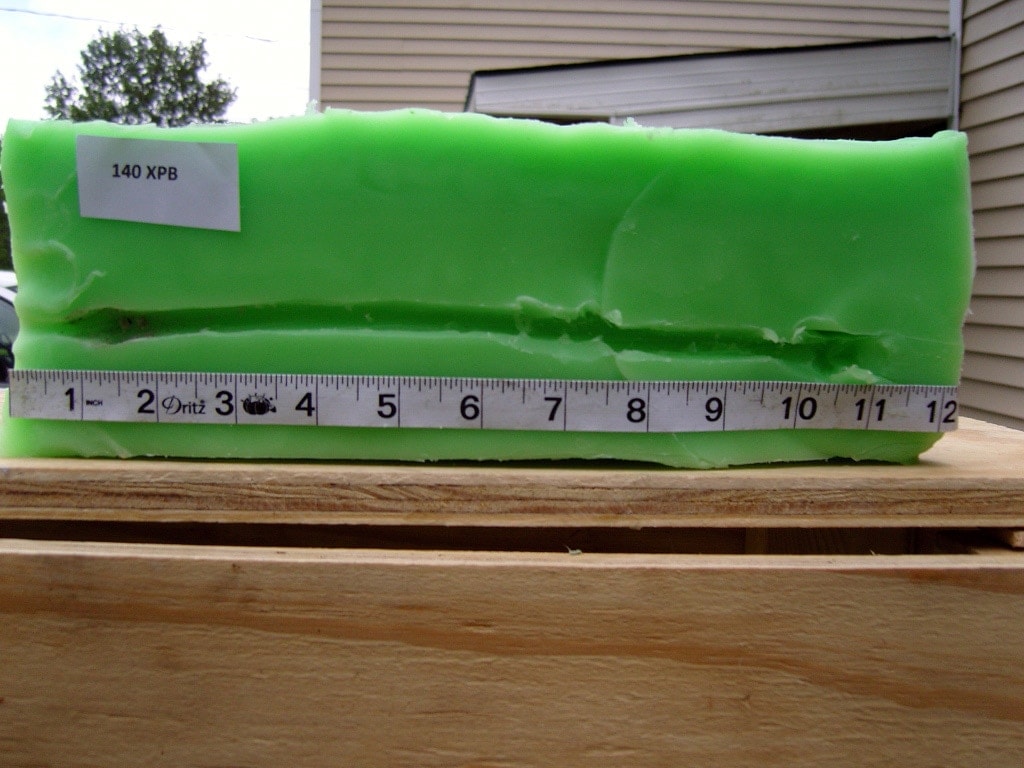 The all copper Barnes XPB, like the X bullets designed for centerfire rifles, consists of a solid stem and a pre-skived front section.  Upon impact, the front section is intended to open up into razor sharp petals, but at carbine velocities most of these petals broke away from the core completely or flattened tight against the stem.  Overall penetration was 11 inches, and the bullet retained 136 grains (97 percent of its original mass) and expanded to a diameter of .473 inches. 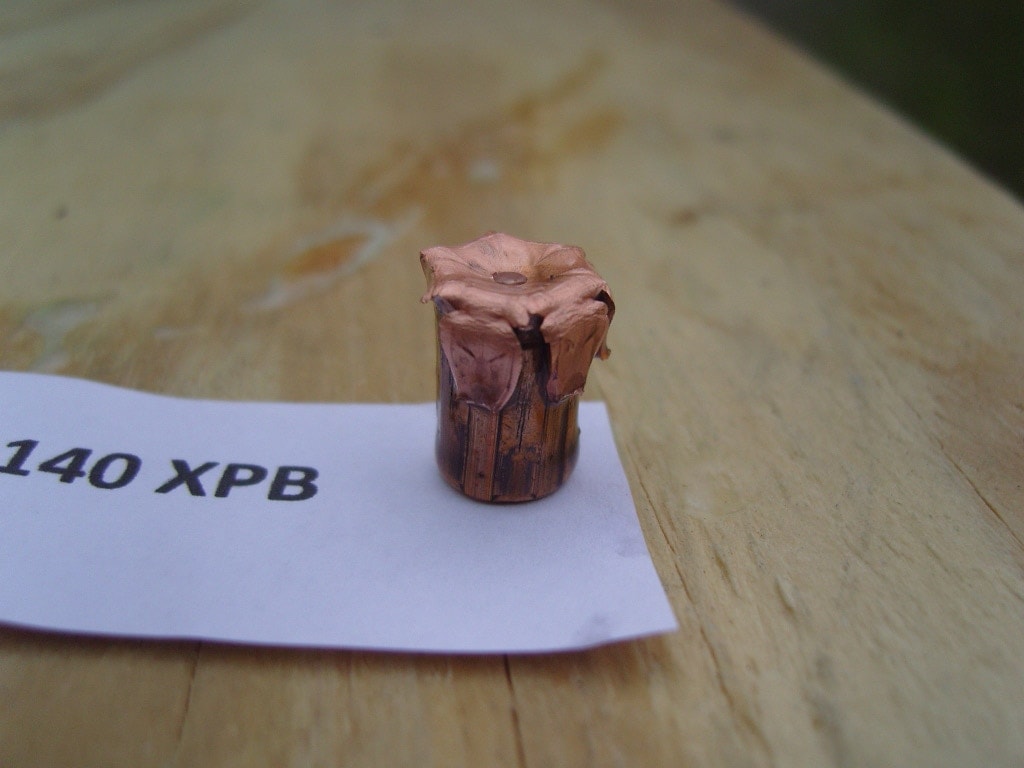 Retrieved 140 grain Barnes XPB bullet. Though the intended petal effect is evident, at the rifle velocity most of this metal broke off or flattened against the stem. (Photo: Jason Wimbiscus) 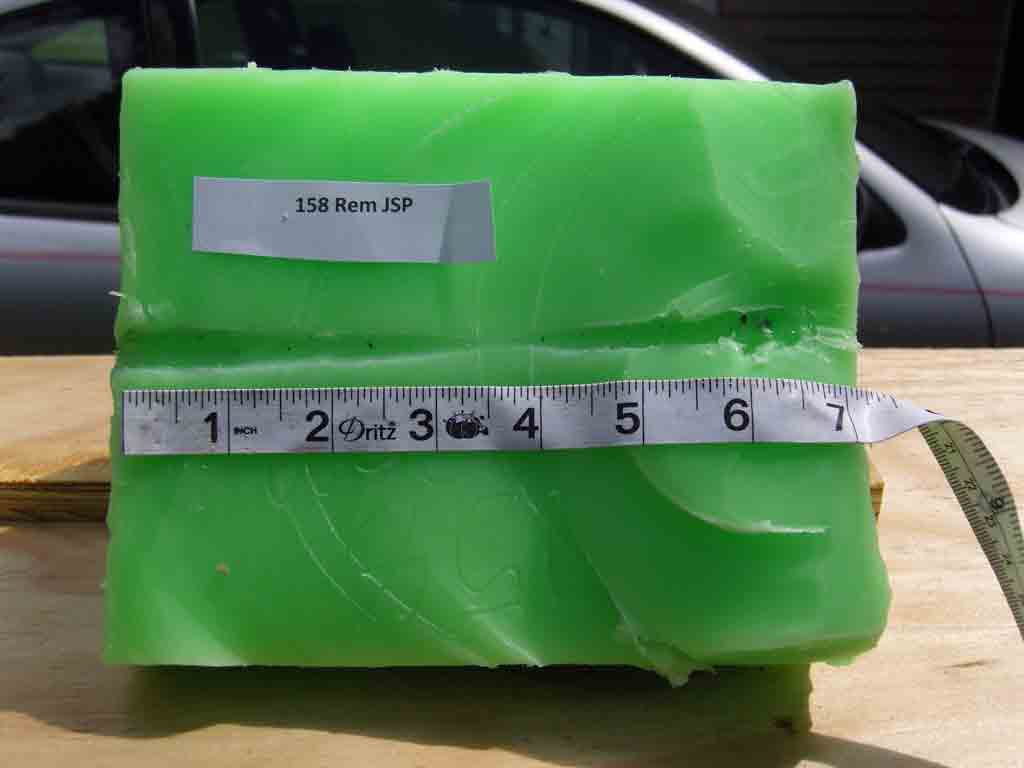 These bulk, budget, bullets which currently retail for less than $20 for a box of 100, outperformed many of the more expensive offerings available in terms of penetration and mass retention.  The bullet penetrated 6.5 inches into the test block and expanded into a near perfect looking mushroom .61 inches in diameter.  The Bullet’s retained mass was actually 100 percent. 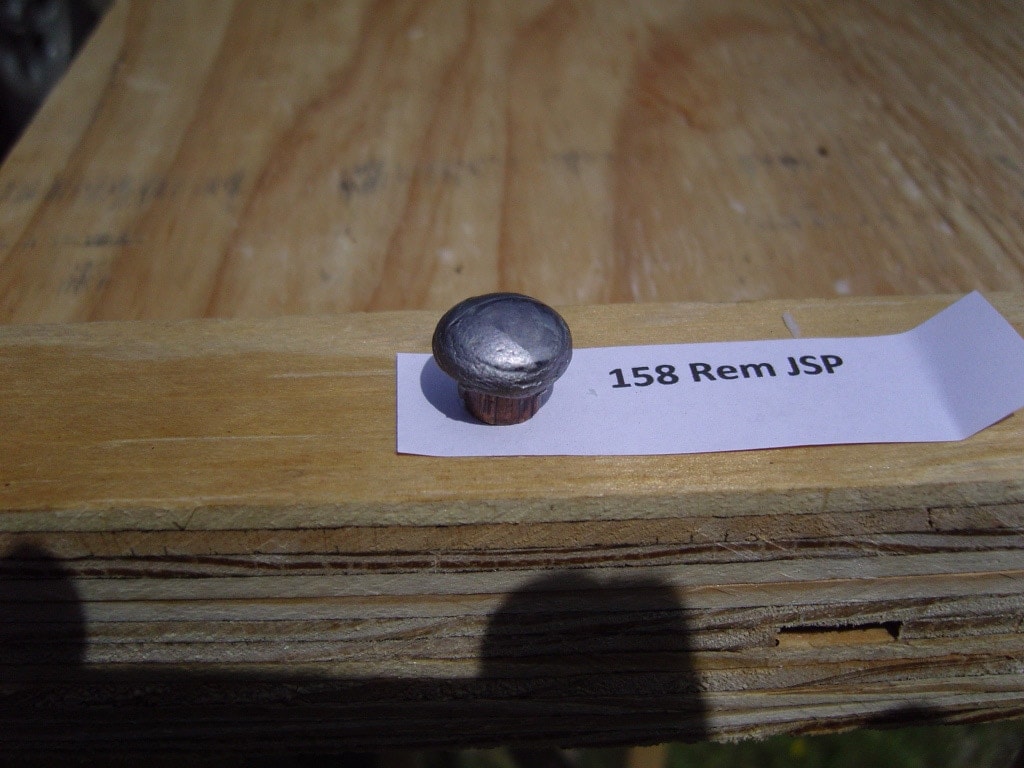 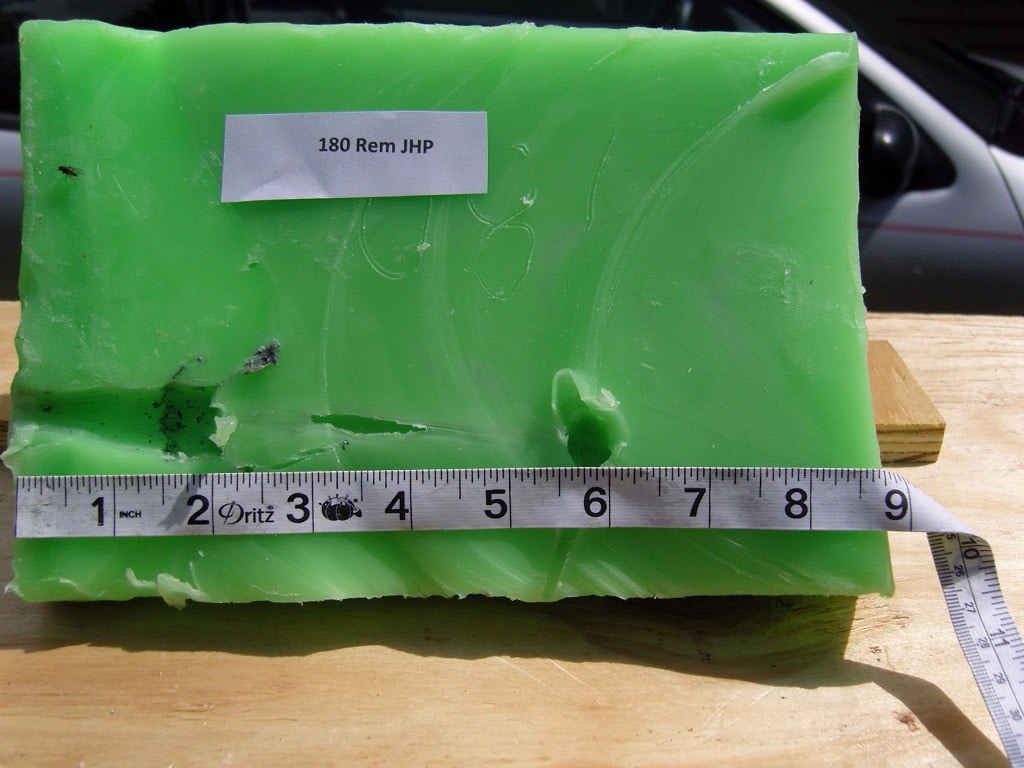 While this load offered slightly less penetration than the jacketed soft point outlined above, the cavity left in the test medium was impressive.  Shortly after impact, the hollow front section of the bullet fragmented into four jagged shards, each one tracking on a separate path perpendicular to the primary cavity.  It can be assumed that these fragments would cause a great deal of laceration in living tissue.  The primary bullet fragment penetrated 6 inches into the test material and had a diameter of .55 inches.  Retained mass was 120 grains or approximately 67 percent. 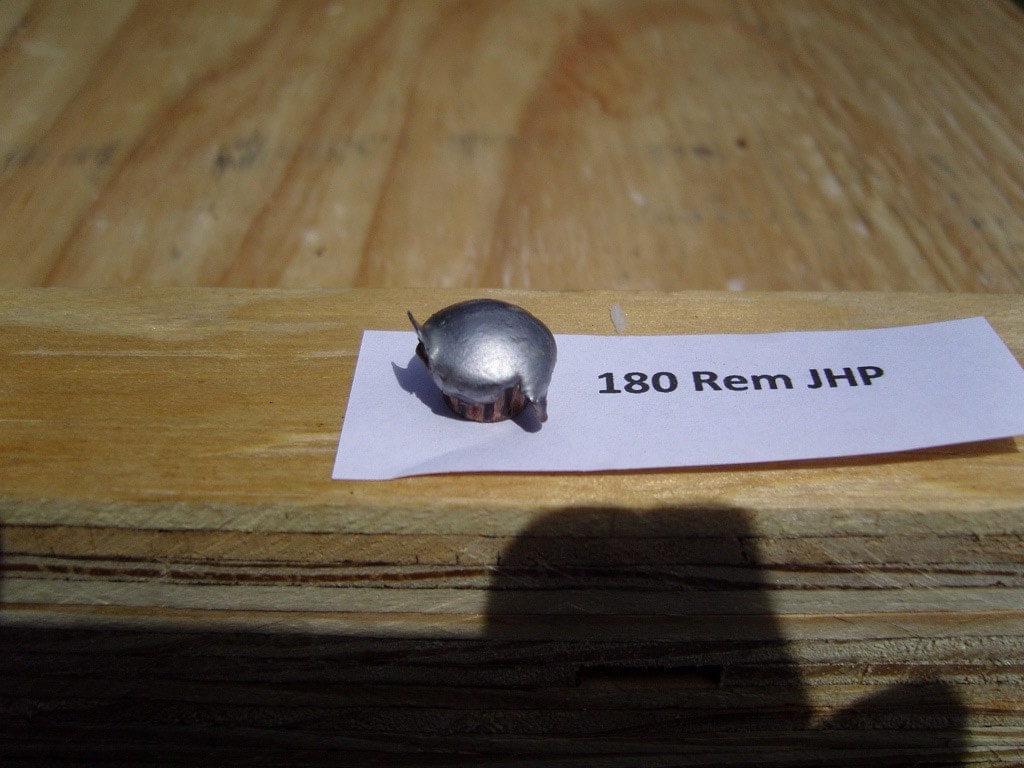 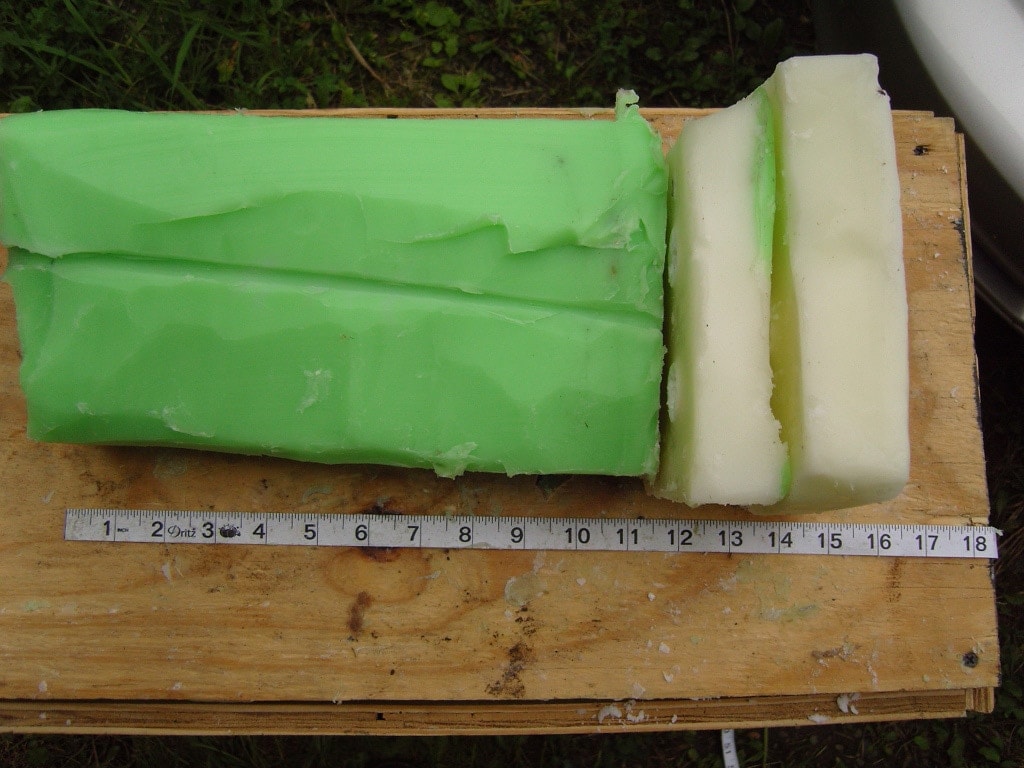 Cavitation of 200 grain Cast Performance Wide Flat Nose, Gas Check. This would be a good round for getting through dense bones.

This load offered incredible penetration.  In addition to 10 inches of test material, the bullet defeated an additional 5 inches of soft wax backer placed behind the test block and kept going.  While the bullet could not be recovered to analyze expansion and mass retention, if the cavity left in the test material is any indication, expansion was minimal and mass retention high.  While cavitation, the formation of vapor bubbles that rapidly collapse to produce shockwaves, was not as dramatic as it was with expanding bullets, the heavy hard cast bullet would be an excellent choice for situations when the ability to shoot through heavy bone is a necessity.

While the .357 Magnum from a carbine does not quite match the .30-30 Win in velocity or energy, at 50 yards all of the loads mentioned in this article approach or exceed the 900 ft/lbs of energy commonly thought to be the minimum requirement for deer hunting.

Additionally, the .357 Magnum chambered in a light, handy carbine offers versatility and portability not commonly found with platforms chambered for centerfire rifle rounds.  The carbine can be loaded hot for deer hunting one day, and loaded with mild rounds the next day for hunting small game.

Finding a load for the .270 or .30-06 that will leave enough of a small animal intact to eat is a far trickier affair than loading a small game round for the .357.  Finally, the .357 in a carbine is just plain fun to shoot.  Recoil with even the hotter loads is moderate at best, with most being mild enough to be barely noticeable.

A .357 carbine wouldn’t be the optimum rifle for shooting deer across a corn field, in situations where shots will likely be 100 yards or less, it’s light, pleasant shooting choice for a day in the woods.